Nashville’s Big Comeback: How the Music City Is Gearing Up for Better Times Ahead 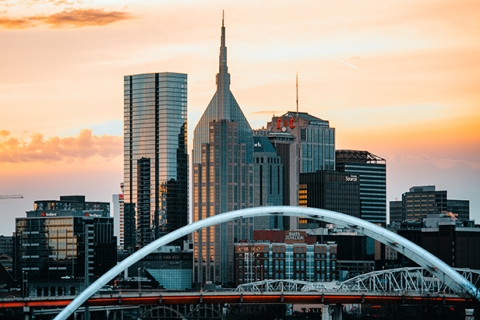 Last year wasn’t exactly a great one for Nashville. The popular music and events destination not only suffered fallout from the pandemic, but also a Christmas morning suicide bombing that injured eight people, severely damaged more than 40 buildings in a historic downtown district and crippled telecommunication systems throughout the Southeast for days.

While some cities might still be reeling from the one-two punch of such overlapping misfortune, the Music City is doing anything but ruminating. In the more than two months since the bombing, Nashville has been picking up the pieces, focusing on recovery, restoration and rebuilding for when tourism, meetings and events begin returning.

According to Adrienne Siemers, senior vice president of sales for the Nashville Convention & Visitors Corporation, although the bombing was a horrific experience, it brought the community together as a family. Efforts included raising funds to aid in the recovery and assist impacted homeowners, businesses and workers, as well as honor the heroic police officers who cleared out residents prior to the blast.

“Because Second Avenue is a historic district, many of the [businesses are] now faced with the task of rebuilding to historic standards, which is underway,” Siemers explained. “The majority of Second Avenue is now open with the exception of one block. In the meantime, the rest of the downtown area is open for business and we look forward to the grand reopening of those businesses that were impacted in the near future.”

Meanwhile, Nashville’s hospitality community has been busy preparing for tourism, meetings and events to resume by putting an array of COVID precautions in place to ensure guest safety. For example, added measures at local restaurants, hotels, convention centers and the airport include added sanitization, updated and additional creative catering options and revised seating charts that allow for social distancing.

“We know we have to go above and beyond to make travelers feel as though they’re entering a safe environment — that’s the only way we’re going to ensure that citywide groups return to Nashville,” Siemers said. “Our hotels and convention centers have been very proactive in taking these precautions.”

These proactive venues include the state-of-the-art Music City Center, which recently became a GBAC Star accredited facility to demonstrate its ability to prepare, respond and recover from infectious disease outbreaks and biohazard situations.

In addition, the NCVC launched last summer Good to Go, a local hospitality safety program established in coordination with Ryman Hospitality Properties and Vanderbilt Health. So far, more than 700 local businesses have signed up for the program and agreed to adhere to a set of safety standards established by the CDC as well as state and local governments, Siemers said.

“Participants in the program have placed a green music note in their front window to show guests entering that they’re working closely with the city and local partners to ensure guest safety,” she added. “Those businesses are also denoted on the NCVC website with a green music note.”

This progressive program appears to be capturing the industry’s attention. On Feb. 24, the city was named a Safe Travelsdestination by the World Travel & Tourism Council, making it one of only two U.S. destinations to achieve the designation, alongside the Lake Tahoe Visitor Authority.

As the world’s first-ever global safety and hygiene “stamp” for the travel and tourism industry, Safe Travels is specifically designed to address COVID-19 and similar outbreaks, created for travelers to recognize destinations and businesses around the world that have adopted the program’s extensive health and hygiene global standardized protocols. The program takes into account current World Health Organization and CDC guidelines and is continuously updated as new COVID-19 information becomes available.

“Nashville’s inclusion in the Safe Travels program speaks to our early efforts to send the right message in our Good to Go program of putting safety first,” said Butch Spyridon, president and CEO of the NCVC. “While we are still taking precautions and remain vigilant about masks and distancing, this is great validation as we prepare for the return of tourism.”

As if all of those safety measures weren’t enough to help event planners, attendees and exhibitors alike feel confident about returning to Nashville, new hotel properties and attractions will make the destination even more appealing to future guests.

New hotels, including a Grand Hyatt, The Joseph, a Luxury Collection and Virgin Hotels Nashville, opened within the last year, and several additional full-service options are under construction in the downtown area, including a Four Seasons, an Embassy Suites and a W Hotel.

In all, approximately 3,000 additional sleeping rooms are currently under construction in the city, Siemers said.

To honor the musical heritage of African Americans and the pioneering artists who were part of Nashville’s music scene, the city’s downtown opened the new National Museum of African American Music on Jan. 30, just in time for the Martin Luther King Jr. holiday.

As the only museum dedicated to preserving and celebrating the many music genres created, influenced and inspired by African Americans, the NMAAM’s expertly-curated collections share the story of the American soundtrack by integrating history and interactive technology to bring the musical heroes of the past into the present. Visitors can experience more than 50 music genres created or affected by African Americans, including Fisk Jubilee Singers, Jimi Hendrix, Ray Charles and Little Richard.

Connected to NMAAM and currently underway is Fifth + Broadway, a mixed-use development that will feature a 100,000-square-foot European-style dining hall. Scheduled to open in Spring 2021, it will include more than 20 local restaurants.

Nashville’s Music City Center Gets Nod for Expansion
Three years after Nashville’s Music City Center was built, the local Convention Center Authority just approved to expand the venue. The center now has a $19.9 million…
Trade Shows to Watch as Comeback Gears Up
Fittingly, World of Concrete in Las Vegas will signal the return of trade shows as we know them. After all, the event organizers are looking to build a foundation of safety…
Music China Gears Up to Help Music Businesses Prosper
Organized by CMIA, Shanghai INTEX, and Messe Frankfurt, Music China, as one of the most reputable musical instruments fairs in the world, will be held on Oct. 10-13 in…
Big Game, Big Transformation: How Minneapolis Became Super Bowl City
Whether you’re a fan or not, it’s hard to miss the hype around the biggest football championship of the year. And this year’s coverage has been particularly interesting with…
How Better Audience Insights Lead to Better Events
Events need an audience. That fact may seem obvious, but with so many priorities it can be easy for planners to omit this step. Overlooking your audience’s needs can be…
The Right Time for a Rebrand
What’s in a brand? Well, a lot of things! More than just a logo, a brand encompasses your message and your reputation. It’s both tangible and intangible. It’s not meant to be…