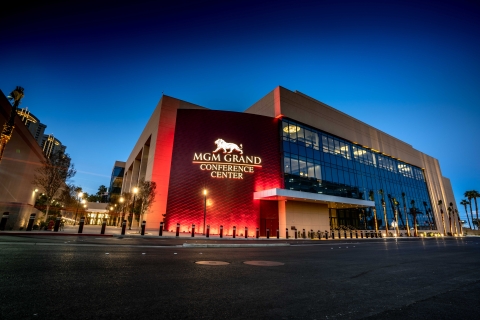 The $130 million, 250,000-square-foot expansion of MGM Grand Conference Center is now complete, meaning MGM Resorts now offers a total of 4 million square feet of meeting and convention space on the Las Vegas Strip. (For reference, that’s more than all the convention space in Manhattan combined.)

He continued, “I’m proud that many of our clients consider MGM Grand their home in Las Vegas, and I look forward to sharing our new look and feel.”

The expansion game is old hat by now for MGM, which recently expanded sister properties Mandalay Bay, Aria and Park MGM (a transformation from the former Monte Carlo hotel). Connecting seamlessly to the existing space on three levels of MGM Grand Conference Center, this expansion gives the facility a combined total of 850,000 sq. ft. of meeting space.

In addition to new space, the expansion came with creative enhancements designed to make the work environment more productive for planners and meeting attendees alike. For example, Stay Well Meetings — which launched at MGM Grand five years ago and features amenities and programs designed to make meetings healthier, like air purification, aromatherapy and circadian lighting — now occupies an additional 22,000 sq. ft. in the conference center.

This project was completed at an excellent time for both MGM and the popular convention city, according to Michael Dominguez, senior vice president and chief sales officer for MGM Resorts.

“The increased demand for space compelled us to develop more robust and creative meeting options throughout our portfolio, including the new offerings at MGM Grand.”

Groups such as ITEX, Arbonne International Global Training Conference and American Staffing Association – Staffing World Annual Meeting will each be utilizing the new space at MGM Grand Conference Center in the coming months.

MGM Grand Breaks Ground on Conference Center and Stay Well Meetings Expansion
In response to customer demand and in pursuit of an ongoing effort to grow its group business throughout Las Vegas, MGM Resorts International has officially broken ground on…
How to Create a Brand Presence Off of the Trade Show Floor
Successful brands must differentiate themselves to stand out to their target audience and from their competitors. For many, trade show marketing is a major component of the…
MGM Growth Properties and Blackstone Real Estate Income Trust to Acquire MGM Grand and Mandalay Bay
MGM Growth Properties and Blackstone Real Estate Income Trust today announced that MGP and BREIT have entered into a definitive agreement to form a new joint venture to…
HCEA Launches New Look with New Logo
The Healthcare Convention and Exhibitors Association has launched a new look to further support their enhanced member benefits, education and support for professionals in…
MGM Resorts, Sydell Group Unveil Plans for New Conference Space at Park MGM in Las Vegas
Out with the old and in with the new. Nowhere has that expression been more accurate than in Las Vegas, where hotel and meeting space makeovers practically are routine.…
Kalahari Wisconsin Dells Hosts THAT Conference, Shows Off New Expansion
There’s nothing like hosting a big event to celebrate the expansion of a convention center, and that’s exactly what Kalahari Resorts and Conventions did earlier this month.…