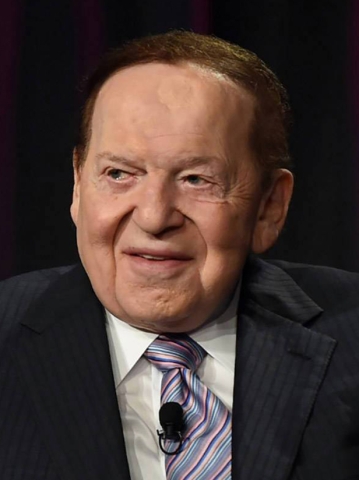 Known as one of the most successful luxury resort developers and transformational figures in Las Vegas history, Adelson founded Las Vegas Sands Corp in 1988. Under his leadership, the company innovated the successful integrated resort and convention center development model that has since become a staple in the Las Vegas resort industry, and one that has been replicated in other leading destinations.

Said his wife, Dr. Miriam Adelson, in a statement: “Much has been written and said about how Sheldon, the son of poor immigrants, rose to the pinnacle of business success on the strength of grit and genius, inspiration and integrity. His was an all-American story of entrepreneurship. When Sheldon launched a new venture, the world looked on with anticipation.”

The young Adelson’s innovative and hard-working entrepreneurial spirit led him to launching the first technology and computing trade show, Comdex, in Las Vegas in 1979, which soon became the largest Las Vegas convention that drew in more than 200,000 attendees annually.

After selling the show in 1995 for nearly $862 million, he took those profits to help set the stage for luxury casino and conference-centric enterprises that included purchasing the aging Sands Hotel and Casino, building the 1.8 million-square-foot Sands Expo & Convention Center behind it, and imploding the Sands to make way for trend-setting opulence of The Venetian Hotel & Casino, which opened in 1999.

Besides The Venetian and Palazzo in Las Vegas, his successful properties included lucrative Sands resort-casinos in Asia, specifically in the popular Chinese gambling destination of Macao and Singapore.

Many from the hospitality and convention community remember Adelson fondly as a generous philanthropist and loyal employer who cared about his workers. After COVID-19 caused Nevada resorts to close in March 2020, the casino magnate continued providing full pay and benefits to all 10,000 Las Vegas Sands Corp. employees as well as the 1,200 employees working in the resorts’ independently owned restaurants.

“Sheldon Adelson was a recognized leader in the exhibition industry for decades,” said David Audrain, executive director of SISO and CEO of ExpoDevCo. “Not only did he create and build Comdex as one of the largest and most recognized events and brands in the world at the time, but he also helped many people working for him become successful leaders themselves. SISO awarded Adelson our most prestigious Krakoff Award in 2014.”

He continued, “Sheldon Adelson will most certainly be remembered as a major force in our industry who understood and supported the needs and opportunities for growth and success. SISO sends our deepest condolences to his personal and business families.”

Douglas Emslie, chair of SISO and Tarsus Group managing director, added, “Sheldon Adelson was a true legend in the exhibition industry. He built one of the major exhibition brands in technology and the Sands Convention Center that not only revolutionized the resort, casino and exhibition markets in Las Vegas, but also in Macau and Singapore. He was a major personality, a showman, but most of all one-of-a-kind entrepreneur."

“I worked with him on his first Comdex show in 1979 and went back and forth on how much in commissions he should get,” Robinson mused. “I again ended up working for him when I went to work at the Sands Hotel in 1992. I watched him blow that up and begin on the Venetian, which I was lucky enough to open up. He was one of the greatest business man I knew! I only respected three men in Las Vegas: Kirk Kerkorian, Sheldon Adelson and Michael Gaughan – business men that cared about their employees.”

Sheldon was loyal to his…

Sheldon was loyal to his staff, certainly a visionary but one who would put his money where his mouth is. He never accepted failure and was an icon for the Trade Show industry because he was never afraid to be different. Of course he never wanted to be first, as Sheldon used to say, "Pioneers wind up with arrows in their back". He was a mentor to me and taught me more about marketing in a week than I could ever have gotten with a year of experience.
Sheldon will be dearly missed.

Hargrove Founder Earl C. Hargrove Passes Away
Earl C. Hargrove, founder of Hargrove, a general service contracting company, passed away at age 86. Hargrove CEO Tim McGill and President Carla Hargrove-McGill issued…
Long-time Experient VP Terence Donnelly Passes Away
The trade show industry lost one if its own July 20, Terence Donnelly, a long-time executive at Experient and a good friend to many. “Terence was full of positivity, always…
Resorts World Las Vegas Joins Roster of LEED-Certified Strip Resorts
The Las Vegas hospitality community became a little greener recently with the announcement from Resorts World Las Vegas, the Strip’s newest resort, that all three of its…
Tradeshow Industry Trailblazer Jerry Kallman Passes Away
Typically, TSNN would write a straightforward news article on a long-time member of our industry’s passing - Gerald G. "Jerry" Kallman, Sr. – Jan. 10, 1931 - May 20, 2020 (…
Trade Show Industry Icon William T. Glasgow Passes Away
William T. Glasgow Sr., a 65-year veteran of the trade show industry, passed away peacefully in his home Oct. 23. “BG”, as he was known, started his career in the industry at…
ASAE President and CEO John H. Graham IV Passes Away
ASAE’s President and CEO, John H. Graham IV, FASAE, CAE, has passed away after an extended battle with cancer. “While no words can adequately express our deep sorrow at…