New York’s Javits Center is sharing its bounty of vegetables from its new one-acre rooftop farm through the creation of Jacob’s Harvest, a new line of pickled produce. The bottled veggies will be distributed to customers and visitors to raise awareness about the venue’s roof-to-table culinary program, which incorporates various crops being grown on the farm into customized meals served during events on-site.

According to Javits Center officials, the new produce line marks the facility’s latest element of its ambitious and progressive sustainability program that includes New York State’s largest green roof (at 6.75 acres) and the farm, which was completed last year as part of a 1.2 million-square-foot expansion project.

“The Javits Center is much more than just a convention center, and this new pickled produce demonstrates how unconventional we truly are,” said Alan Steel, CEO of the New York Convention Center Operating Corporation, which operates the Javits Center.

He continued, “We’re proud to provide our customers with produce grown only steps from where they are consuming it, and we hope our efforts inspire others to follow our lead. From maintaining the largest green roof in New York State to serving as a wildlife sanctuary, we’re committed to challenging what it means for a building to be sustainable in a dense urban environment like New York City.”

Managed by urban farming company Brooklyn Grange and located more than eight stories above street level, Javits’ rooftop farm is now in its first full season and is expected to generate up to 40,000 pounds of annual produce, ranging from arugula to zucchini.

Throughout the year, executive chefs with Cultivated, Javits Center’s on-site catering team, will create the pickled produce with various ingredients, some of which are sourced directly from the rooftop farm.

As an early precursor to the bottled produce, Jacob’s Honey has been distributed in small jars to visitors since 2017, followed by the creation of a honey-infused lip balm in 2019. All of these items were designed to highlight the facility’s award-winning sustainability program, which includes serving as a habitat for 37 bird species, five bat species and nine bee hives.

Meanwhile, the rooftop farm has joined the New York State Grown & Certified program, a statewide effort that identifies local producers who adhere to higher standards in terms of food safety and environmental stewardship.

As part of its unique ecosystem, the Javits rooftop includes a food forest planted in its 10,000-sq.-ft. rooftop orchard that features seven distinct layers of native and non-native plants stacked vertically. Designed to mimic the ecological benefits and produce dynamics found in forests and to increase the biodiversity, efficiency and sustainability of food production systems, Javits’ food forest amplifies the ecosystem services already supplied by the green roof and farm. These include stormwater mitigation, thermal regulation and forage and habitat for area wildlife.

Along with a four-level truck marshaling facility that can house up to 200 tractor-trailers at a time, the facility features a 54,000-sq.-ft. special event space, the largest space of its kind in the Northeast, as well as more than 200,000 sq. ft. of meeting room and pre-function space and a separate entrance for guests. All spaces are equipped with the latest technology in lighting fixtures, heating and cooling systems and wireless connectivity. The convention center’s expansion has been certified LEED Gold by the U.S. Green Building Council. 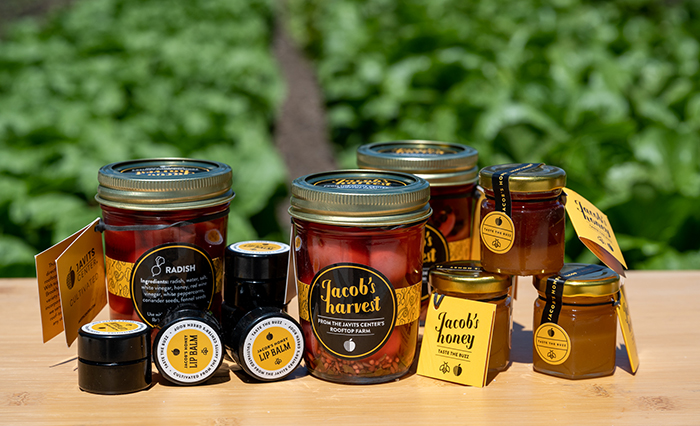 Javits Center Excels as a Model of Sustainability with Pioneering Rooftop Farm and Other Upgrades
New York City’s Javits Center may be located in one of the busiest cities in the world, but it’s as green as it gets at this newly expanded facility. The center just unveiled…
Javits Center, Centerplate Serve Up New Salad Dressing Made from Harvested Rooftop Bee Hive Honey
A new salad dressing featuring honey harvested from the bee hives housed on the Javits Center’s green roof now is on the menu at the convention center’s Taste NY Bistro. The…
The Javits Center Launches New Online Ordering System for Convention Customers
The Javits Center has officially launched Jake, a new online portal designed to improve the customer experience by simplifying the ordering process of products and services…
New Bird Species Flock to Javits Center’s Green Roof
Two new wild bird species were recently identified at the Javits Center’s nearly seven-acre green roof, which has evolved into a unique wildlife sanctuary since its genesis…
Javits Center Opens Green Roof for Summer Tours
Imagine you’re at a large trade show in a giant convention center among throngs of people and you’re starting to feel tired and stressed. Instead of just grinning and…
As US Election Wraps Up, NAB Show New York Takes Over Javits Center
By Elizabeth Johnson If you watched the U.S. Presidential Election coverage on Tuesday night, you likely saw a crowd of people gathered under the Jacob K. Javits Convention…