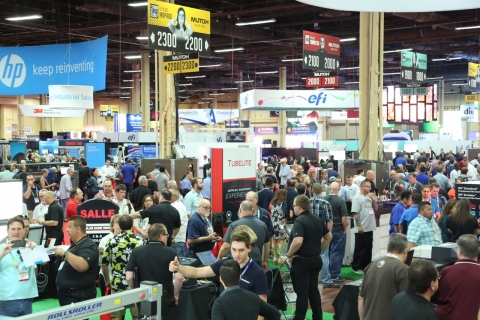 Held April 19-22 at the Mandalay Bay Convention Center, the annual trade show and conference for the sign, graphics and visual communications industry broke its own attendance records, with more than 20,500 industry professionals, including just under 600 exhibitors, spanning a sold-out, 210,000 square foot showfloor.

At the time of the show’s opening, dozens of exhibiting companies remained on a waiting list, hoping to secure their spot on a packed expo floor.

Sponsored by the Sign Research Foundation, the sold-out NSREC drew in academics, students, researchers, planners and designers, with attendance 220 percent higher than its previous record.

In addition, the XDP program brought in architects, designers, buyers and end users to ISA International Sign Expo while the ISA Elite included 34 young professionals in the industry.

“There is no doubt that ISA International Sign Expo is the only trade show that brings together the breadth of the sign, graphics and visual communications industry and those who influence it,” said Lori Anderson, ISA president and CEO.

She continued, “Every minute of the four-day education and trade show offered opportunities to make valuable connections, learn groundbreaking ideas and see innovative products and services to help businesses grow.”

Adding to the buzz on the expo floor were a host of product introductions, ranging from groundbreaking print innovations to the latest in workflow solutions and LED lighting.

“Getting to see these innovations in action can propel businesses and the industry forward,” Anderson said.

She added, “It is early enough in the year that sign, graphics and visual communications companies can capture these innovations to make 2017 one of their best yet.”

To capitalize on the show’s growth, ISA plans to expand the expo footprint for its 2018 event, set for March 21-24 at the Orange County Convention Center in Orlando.

CES 2017 Showfloor Breaks Record in Las Vegas
CES, the world’s largest consumer technology trade show, had yet another record-breaking year. Held at the Las Vegas Convention Center and venues throughout the city Jan. 5-8…
ISA International Sign Expo 2018 Scores Records in Orlando
ISA International Sign Expo 2018 closes with attendance topping 20,387 - making it the largest ISA Sign Expo in Orlando and one of the largest in ISA Sign Expo history. The…
InfoComm International Breaks Exhibitor, Showfloor Records at Las Vegas Convention Center
InfoComm International, for the commercial audiovisual and information communications industries, saw record growth in not only exhibitors, with 1,000 on the floor and 211 of…
Vision Expo West 2018 Breaks Attendance Records in Las Vegas
Vision Expo West celebrated its 30thanniversary by achieving a nearly double-digit increase in attendance compared to the year before.  Held Sept. 26-29 at the Sands Expo in…
LIGHTFAIR International 2018 Breaks Records in Size and Participation
LIGHTFAIR International (LFI) set a new record at its 29thannual edition, held May 6-10 at McCormick Place in Chicago, with increased registration and a larger expo footprint…
ICUEE 2015, Pack Expo Las Vegas Both Break Attendance, Exhibit Space and Number of Exhibitor Records
Last week was a good one for two different shows – ICUEE 2015, the International Construction and Utility Equipment Exposition, and Pack Expo Las Vegas – both of which broke…