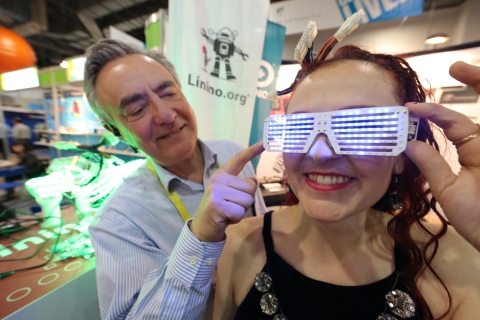 The Consumer Electronic Association’s 2015 International CES presented attendees from around the world, with the latest in autonomous cars, wearable technology, the Internet of Things and much more Jan. 6-9 in Las Vegas.

This year’s show featured 3,600 exhibitors spread out over 2.2 million net square feet of space, or as Tara Dunion, senior director of communications for CEA, likes to say, “that’s 35 football fields of technology.”

She added they expect audited attendance numbers to be about 150,000 to 160,000, which is where those numbers were last year.

That many exhibitors and attendees can be a shock to those at CES for the first time. Brandon Tatum with WingStuff.com described the experience as overwhelming.

This year was his first one attending, and he said that he didn’t know what to expect. “Maybe if we were here for the whole week, we’d have time to take it all in and maybe pace ourselves,” he added.

Tina Knightly from Staples has been coming to CES for six years and said, “I think it’s great this year.” Knightly said she liked the Tech West area at the Sands Expo. “It’s a little smaller; it seems like it’s busier here than over at the convention center,” she added.

Wearables, a trend that was starting to emerge at last year’s show, had a huge presence this year. Also trending was the Internet of Things, with more than900 exhibitors highlighting devices as diverse as baseball bats to toaster ovens.

Dunion said that the automotive marketplace at CES has doubled during the past 4-5 years. Ten major auto manufacturers exhibited this year, highlighting autonomous cars and high-tech safety features.

The digital health and fitness marketplace also has seen breakthroughs. Fitness products are no longer just counting steps, but also measuring your body fat and collecting all sorts of biometric data. Glucose meters are now able to measure your blood sugar, as well as send the updates to your doctor.

A popular spot on the showfloor was Eureka Park, a showcase for start-ups. Jay Nichols with Hi WiFi, an exhibitor located in that area, said, “It’s really fun to be in the Eureka Park area. It’s all startups. You’re surrounded by people filled with passion and enthusiasm.”

Jocelyn Painter with Brio, a first-time exhibitor at CES, said she saw a lot of traffic in their booth. “From our perspective, only coming here once, wow, it’s a lot more traffic than I even anticipated,” she added.

In addition to the expansion of the showfloor, new in 2015 was C Space at ARIA. CES is billing it as the destination for creative communicators, brand marketers, advertising agencies, digital publishers and social networks.

Dunion said that the advertising content community was coming to CES in ever increasing numbers. Those attendees knew they needed to be at CES, but they didn’t necessarily have a home at CES.

CES started reaching out to this group and said, “We know you’re here, what are your needs and how can we incorporate you into the CES experience?” What those advertisers wanted was meeting space and a conference program. Thus, C Space was born.

Other organizers can learn from the success of C Space. Dunion offers these words of advice, “not everyone fits in the same size box so listen to your customers, listen for ways to meet their needs and come up with creative solutions.”

NECC Shanghai to Add Exhibition Space
National Exhibition and Convention Center (Shanghai) (NECC), currently one of Asia’s largest exhibition venues, announced that the venue will add at least 60,000 m2 of new…
2015 SEMA Show Adds Space Outside Las Vegas Convention Center
The 2015 SEMA Show will expand into a new area to accommodate additional exhibitors during the show Nov. 3-6 at the Las Vegas Convention Center. Located in the outside area…
JCK Revamps, Moves into New Mandalay Bay Convention Center Space
JCK Las Vegas, the flagship show of Jewelry Market Week, began its 2016 show June 3 with a revamped shopping experience utilizing the new expansion of the Mandalay Bay…
CEA Rolls Out New Awards and Events for 2015 International CES
The Consumer Electronics Association unveiled a series of awards and events for the 2015 International CES, including the new APPNATION IV, Wearable…
Interbike Adds Space at Mandalay Bay Convention Center
For the past two years, Emerald Expositions’ Interbike has taken up four halls at the Mandalay Bay Convention Center in Las Vegas, and now it’s set to expand to even more…
Tarsus’ Labelexpo Global Series Expands into SEA
London-listed international exhibition organiser, Tarsus Group, has announced plans to expand its Labelexpo Global Series with the launch of Labelexpo Southeast Asia.…