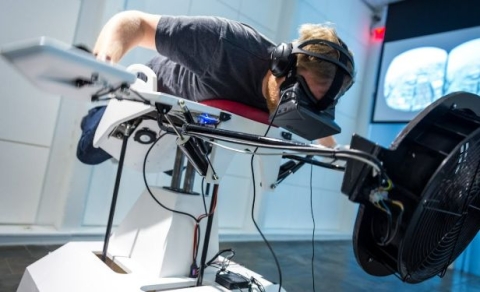 A walk down memory lane might do some good when pondering the road ahead for trade shows.

Channing Muller, a public relations specialist in the events industry, thinks back to her days playing SimCity when it first emerged in the 1990s. She wasn’t alone. The game in which players created their own environment, filled with different zones, and then explored it for hours at a time, captivated millions on the internet. “Now people can do that for business,” said Muller.

Intrado Digital Media President Ben Chodor, meanwhile, turns to the times he’d watch the big screen at the 92nd Street YMCA in New York. After a movie screened, filmmakers and actors would do a live Q&A going behind-the-scenes of the production. “They were making it a real immersive experience,” recalled Chodor of the offering only available to those who attended that very screening.

What does a video game and movie showing have to do with events? Potentially a great deal. The above scenarios are the building blocks of two ways in which a digital component can be incorporated into a three-day trade show.

Oculus and other virtual/augmented reality technologies make it possible to create digital trade shows where attendees, or more accurately their avatars, visit and do business with exhibitors. And flipping the switch on Chodor’s experience, unique experiences such as interviews and backstage anecdotes are increasingly popular methods to directly engage remote audiences.

Yes, trade shows are coming back — perhaps faster than imagined. But there’s no going back to the pre-pandemic formula, said keynote speaker and event consultant Bob Mitchell, who has an extensive media background. “It’s no longer the circus that comes to town,” he said. “Just because you build it, doesn’t mean they will come. There’s a little bit of reckoning going on, but it’s a healthy reckoning.”

Health and safety concerns will not be the only obstacles organizers overcome to fill convention centers and expo halls. Smaller corporate travel budgets and new office workflows developed during the pandemic will force some CEOs to send fewer staff on-site to a trade show. How the event company responds to its online community may do as much for brand loyalty as the physical event itself.

As we continue our look into the future (see Part 1 here), TSNN sought out several event professionals to explore how technology will be integrated into trade shows.

“We will see F2F events come back but they will be more purposeful due to slashed travel budgets and increased restrictions,” said John D’Adamo, heads of USA Sales for VenuIQ. So even if an event stays strictly physical during the show, it will behoove all parties to maintain a connection online the rest of the year. Companies like Cvent, Juno, Glisser, Swapcard and more are among the many touting the ability to create a 365-day ecosystem.

Sam Lippman, president and founder of Lippman Connects who has more than 35 years of hands-on experience producing exhibitions and conventions, noted this will be more important —  and successful — for certain industries and sectors. An example would be a group looking to purchase a large machine every five or six years, and therefore does not need to be on top of the latest trends. But a technology-based organization should already be hardwired into the idea of maintaining connections year-round via a device.

David Stevens, director of global events and field marketing at Alation, said a lot of criticism over virtual events is due to the misuse of technology. “Let's rethink what we did instead of doing the same old thing,” he said. “You have a new situation but you applied the old rules, and your old way of thinking didn't work. Surprise, surprise.”

For instance, rather than broadcast all of the education and general sessions as they happen, planners should condense them into “digestible” segments, Chodor suggested. Arguing content is king, he said the ultimate purpose will be to allow the event to live on for days, weeks and even months. Watch how TV shows like “Saturday Night Live” break up episodes into separate YouTube clips and how Netflix encourages the swift transition to related material and you have a jumping off point.

Want to know where shows are headed? Follow the advice Deep Throat gave Bob Woodward and Carl Bernstein: “Follow the money.” For events, that means the clients pouring cash into the show are ultimately going to dictate the pace of digital evolution. “Sponsors will begin to drive the experience, instead of buying into one,” said US Bank Event Marketing Strategist Jodi Reichstadt.

Chodor agrees, and said limiting exposure to in-person gatherings won’t make much sense. “Sponsors, for the first time, are starting to go, ‘Whoa, I did this virtual event and it wasn't the same as physical but my branding lasted for a really long period,’” he said.

There Will Be a Battle Over Data.

Arguably the biggest benefit of virtual events is all the information that is captured, beginning at registration. There are more than enough companies to assist in that digital transition, but not all have the same philosophy over who owns the information.

A preview of this debate played out at the all-digital UFI European Conference in June. During a striking panel, CEOs of major leading platforms laid out competing visions. ExpoPlatform founder and CEO Tanya Pinchuk argued event organizers are entitled to full and exclusive use of their data, an opinion shared by Grip CEO Tim Groot.

“I think the only genuine way to prove that the data will not be used in any way other than we meant to use it, is to have this written in our agreement,” Pinchuk said.

However, Swapcard President and CEO Baptiste Boulard argued that platforms should control the data. Swapcard, he said, maintains the records for three years and only deletes it when an attendees doesn’t sign on to an event powered by Swapcard for another three years.

Gamification Will Take on Different Forms.

Scoring points and awarding prizes based off of event app engagement is about as far gamification goes now. But if Muller is right with her SimCity comparison, it is going to get a lot more interesting. “Software developers have proven they can create virtual experiences for trade shows that will provide additional reach for both event hosts and exhibitors,” she said.

But not everyone is convinced we’re about to dive into video game territory. “I’m not avatar-driven,” admitted Chodor. “It’s something you enjoy the first 10 minutes into it, but no one has perfected the maneuvering.”

There Will Be Failure.

That’s OK. No one quite knows how everything will play out. And what works for one group may not be right for another. “This year is harder than last year,” said Mitchell. “Last year, it was either you pivot to virtual or you cancel. Now there are so many choices.”

Photo Caprtion: The Birdly VR Experience is an example of engaging new technology at booths.

The Future of Trade Shows, Part I
David Stevens, director of global events and field marketing at Alation, knows a thing or two about planning events. So when Alation was recently evaluating purchasing a…
The Future of Hybrid Trade Shows and Events
In-person events and trade shows are going virtual, a significant shift forced by the COVID-19 pandemic. But the question is, will these events remain virtual for the…
TSNN Webinar: The Future of Trade Shows - Technology, Competition and the Customer Experience
The digitization of events, as well as the proliferation of platforms, applications, and devices designed to “retool” traditional trade shows, is proceeding much more quickly…
A Buyer’s Guide to Trade Show Digital Displays – Part II
In Part 1 of this article, we broke down the features, benefits and strategies to mitigate risk for selecting tablets, kiosks and TV screens. In Part 2, we will cover…
A Buyer’s Guide to Trade Show Digital Displays – Part 1
Digital images displayed on digital screen displays open up a new world of changeable and moving images. When it comes to selecting digital displays, exhibitors are faced…
The History of Trade Shows
You could trace just about any form of social connection to much deeper roots and scenes than you would recognize today. Trade shows, and all the forms that it has evolved…