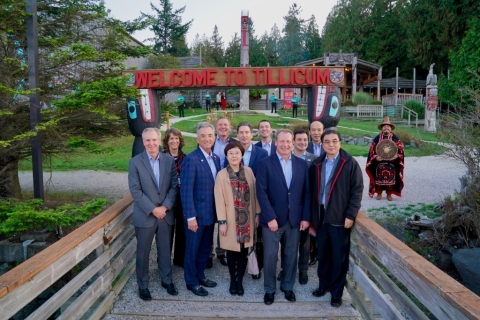 Seattle played home to a major event for United States tourism last month. The 13th annual U.S.-China Tourism Leadership Summit took place at Hyatt Regency Seattle, Sept. 18-20, with the goal of building and strengthening relationships between U.S. and Chinese travel and tourism leaders and government officials. During the three-day show, participants focused on the contribution of the industry to the world’s two largest economies.

“Over the years, the discussions that have taken place at and around this summit have proven mutually beneficial to improve strategies for tourism marketing in the United States and China,” said Christopher L. Thompson, president and CEO of Brand USA. “As a result, the industry has made significant contributions to economic development, the balance of trade and better cultural understanding in both countries.”

Throughout the event, participants took part in discussions and listened in on presentations focused on best practices in marketing, travel and tourism, and addressed current issues impacting the industry. Panelists talked about the evolution of the China market and the importance of inspiring travelers through storytelling.

When business was over, Seattle officials were able to show off the city’s best attractions, including Blake Island Marine State Park and Argosy Cruises’ Tillicum Excursion; the Space Needle; Chihuly Garden and Glass; Boeing Future of Flight, and Chateau Ste. Michelle Winery.

This was Seattle’s first time hosting the leadership summit, as Chinese visitors are crucial to its tourism market. (The event rotates every year between being held in China and the U.S., with the most recent domestic locations being Atlanta in 2017, Los Angeles in 2015 and Chicago in 2013.)

“China is Seattle’s top overseas inbound visitor market, and we are proud of the longstanding relationship we have forged through tourism, trade and shared cultural history,” said Tom Norwalk, president and CEO of Visit Seattle. “This summit provides an opportunity to highlight the best of what Seattle and the Puget Sound region has to offer and to position it as a must-visit destination for the lucrative China market.”

The United States welcomed 3 million Chinese visitors to China in 2018, with 85 percent of those being repeat visitors, according to NTTO statistics. China is also the No. 1 market for U.S. tourism exports (at $34.6 billion) and is among the top countries for visitor volume as well.

In 2018, more than 185,000 [MICE] visitors from China came to Seattle and King County and spent $224 million, according to Visit Seattle, making it a crucial meetings market for the city—and business that it’s working to retain despite the current trade war between the two countries.

“This year’s gathering came at a moment when it has never been more important to reaffirm [the U.S. and China’s] mutual interests and the importance of travel and tourism,” said Norwalk.

He added that Chinese tourism to the U.S. grew significantly for 14 consecutive years until 2018, when it suffered a precipitous drop of 5.7 percent in the wake of trade war tensions.

“As the trade war escalates, our regional tourism industry stands to incur disproportionately high collateral damage, and we are seeing a decline in visitors from the China market projected for 2019 due to trade tensions,” Norwalk said. “It is critical not to allow politics to weaponize travel.”