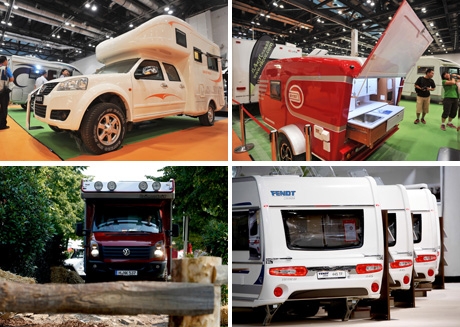 All in CARAVANING 2015 in Beijing, serving China’s market for RVs/mobile homes and camping, drew a total of 294 exhibitors showcasing about 300 RVs and mobile homes, as well as basic vehicles, accessories and diverse offers for vacations and recreation.

The show also attracted more than 11,000 visitors to the Beijing Exhibition Center. An accompanying ancillary program and a two-day congress with international specialist lectures complemented the trade fair.

In addition to Chinese exhibitors, many international companies presented the latest RV and mobile home models.

European exhibitors from Germany, Belgium, Italy, the Netherlands, Sweden, Slovenia, the United Kingdom and Turkey, as well as companies from Japan and the U.S. participated in the trade fair

The All in CARAVANING Annual Conference included the “Campground Day”, the “E-Commerce Session” and the “RV Day”, discussing current and future industry trends.

All in CARAVANING in Beijing has been designed as an information and order platform in a still young segment in this country.

The German Federal Ministry for Transport and Digital Infrastructure (BMWI) was again a sponsor of All in CARAVANING 2015.

One day before the trade fair opened, delegates from the BMVI and the Chinese Ministry of Transport met to exchange experiences and discuss future development in the Chinese RV market.

The German Caravaning Industry Association (CIVD) and the German Association of Automobile Tuners (VDAT) - acting as representatives of their respective industries - were dialogue partners for the BMVI and the Chinese Ministry of Transport.

The next All in CARAVANING will take place June 18-20 at the Beijing Exhibition Center.

7th All in CARAVANING Concludes in Beijing
The 7th All in CARAVANING (AIC) was held for the first time at Beijing Etrong International Exhibition & Convention Center, occupying a total exhibition area of 35,000 m2…
CHINA MED 2015 Will Head to Beijing in March
CHINA MED 2015, 27th International Medical Instruments and Equipment Exhibition, will return in March to the China National Convention Center in Beijing. Certified by…
Los Angeles Is Big Draw for Manufacturing Show Westec 2015
Westec 2015 proved to be the place to be for the manufacturing industry. More than 11,000 attendees (up nearly 5 percent from 2013) and 400-plus exhibitors from more than 500…
ISPO Beijing 2015 Breaks Records with Nearly 30,000 Attendees
A total of 434 exhibitors, compared with 431 last year, with 656 brands presented their products from the Outdoor, Action Sports, Ski, Sportstyle and Fabrics & Fibres…
Intertextile Shanghai Apparel Fabrics – Spring Edition 2015 Draws Record Attendance
The highest-ever attended Intertextile Shanghai Apparel Fabrics – Spring Edition 2015 concluded in March with huge increases in both exhibitor and visitor figures as the fair…
Kuala Lumpur Convention Centre Draws Nearly 780,000 Attendees in First Half of 2015
The Kuala Lumpur Convention Centre (the Centre) has chalked up a busy first half in its 10th year of operation with a recorded 661 events drawing a total 778,414 delegates…