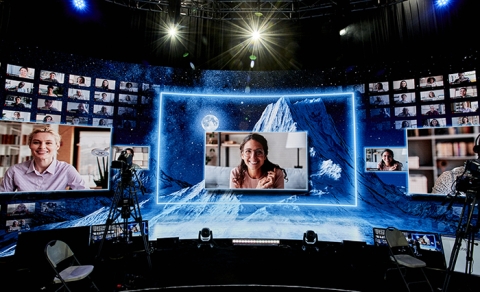 If the human species is good at one thing, it’s adapting. So too is the trade show and events industry, which was forced to “pivot” during the worst of the pandemic by moving into a more innovative, forward-thinking mindset via the leveraging of virtual event technology. What has resulted is a digital events revolution and a growing hybrid evolution that is likely to be a mainstay in the events world for the foreseeable future.

To meet the needs of events serving both in-person and virtual audiences, hybrid event production studios are popping up in cities and at convention centers across the U.S. and U.K. Here are four new state-of-the-art facilities to keep on your radar: 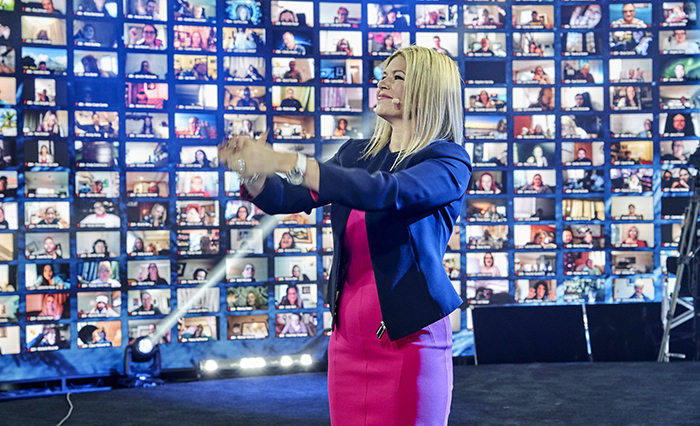 Built at a breakneck speed of just over two months before opening in December 2020 in Southwest Las Vegas, Worre Studios is a multi-million-dollar, 25,000-square-foot interactive studio capable of hosting up to 250,000 digital attendees and 300 in-person attendees.

Boasting two 5G networks, a stage-in-the-round footprint and surrounded by a 360-degree 1.9mm 4k LED interactive screen system, the studio offers broadcast-quality audio and video equipment, presenters and hosts to accommodate a wide range of virtual and hybrid events. Venue setups can be customized depending on the needs of each event.

Whether an event is hybrid or purely digital, event hosts can visually expand the audience field to talk directly to attendees, see and hear their reactions and have constant interaction, while the studio’s translation platform can translate to attendees and back to the host in multiple languages, allowing global participants to have the same live event experience.

“What was created here was very purpose-built for those who need not only a hybrid solution but also a virtual, fully participatory environment,” explained Worre Studios President Larry Smith. “What we thought would be a temporary answer during the pandemic ended up being the perfect solution to reshape what’s possible for live and virtual events, making them even better than imagined. The capabilities of the studio break the boundaries of what’s possible.” 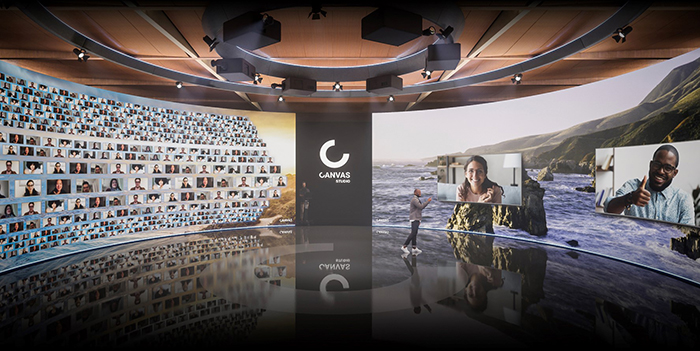 Set to open the week of Oct. 18, the Monterey Conference Center (MCC) and Montreal-based Immersive Design Studios are putting the finishing touches on the 10,000-square-foot CANVAS Studio. Able to accommodate 125 in-person attendees via theater-style seating and 30,000 virtual guests, the space was created to be an immersive, interactive and engaging environment for both in-person and virtual attendees and speakers.

Located on the second floor of the MCC inside the Steinbeck Ballroom, the circular studio is equipped with 360-degree wraparound screens and Immersive’s CANVAS software platform, which enables two-way interactivity that allows speakers to see thousands of remote attendees up on the screens simultaneously, as well as zoom in on any individual for spontaneous and personal interactions.

According to Doug Phillips, MCC general manager, the new studio will enable business leaders, performers and others to safely and cost-effectively reach their audiences without compromising on the quality and communal energy of an in-person meeting or event.

“We’re thrilled to be opening this innovative and high-end studio space to enable our clients to expand their reach and augment their revenue streams,” Phillips said. “This past year we have creatively developed solutions to better serve the industry in a post-COVID world, and we believe that offering a blend of hybrid and virtual events well into the future is an excellent way to ensure that meeting planners have flexible and cost-effective options for whatever circumstances may arise.” 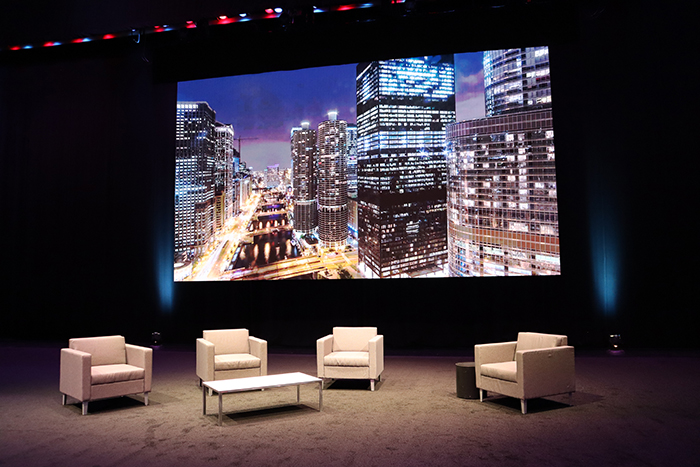 Chicago’s McCormick Place isn’t just the largest convention center in North America, it’s also home to the 4,249-seat Arie Crown Theatre, which found itself sitting unused due to the pandemic. But instead of allowing the venue to stay empty, McCormick formed a “pandemic partnership” with Freeman in the summer of 2020 to repurpose the space and create the Arie Crown Theater (ACT) Hybrid Production Studio for digital and hybrid meetings and events.

Boasting all the latest high-tech bells and whistles, the new studio comes equipped with  a 400-square-foot 4K LED video wall, top-tier set design and the ability to capture content using virtual environments and augmented reality while connecting with audiences worldwide via live streaming. A team of experienced professionals from both McCormick and Freeman is also available to help support event organizers in the production process.

Rather than using projections with a green screen, the ACT studio uses the LED wall as its backdrop, which can show images or slides during the livestreaming of a presentation, as well as cut to video, according to David Kennedy, assistant general manager of McCormick Place.

“The people in the audience can see the people/presenter, as well as the content behind, so it’s the best of both worlds,” Kennedy explained. “Many items can be pre-recorded, edited and sent out, which provides another option for non-live or non-hybrid events. That allows you to add other speakers that may be in different locations around the country if they want to participate yet have timing conflicts. We have received nothing but positive feedback for our capabilities.” 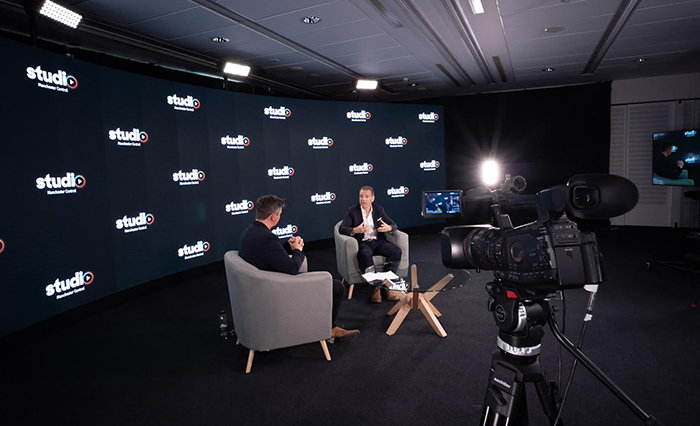 Earlier this year, Manchester Central, one of the U.K.’s largest event venues, opened its Studio at Manchester Central, a purpose-built, broadcast-quality production studio that enables content to be pre-recorded or live streamed from a professional TV broadcasting environment.

According to Shaun Hinds, CEO at Manchester Central, the venue is fully prepared for the growing demand for hybrid facilities and is ready and able to successfully host safe events of all shapes, sizes and formats.

“The future of large-scale events is about providing a range of options—from virtual and hybrid platforms through to the very best facilities where people can meet—that can be tailored to the specific requirements of every event,” Hinds said. “We fully expect digital and real-life activities to co-exist and complement each other to make events accessible for everyone, as well as restore in-person confidence.”

3 Color Trends to Consider for Your Next Event
Looking for ways to keep your events fresh and vibrant? Styling with furniture and décor that follow the latest color trends of the year, such as berry hues, soothing greens…
5 Tips to Ensure Your Next Hybrid Event Is a Success
Hybrid events are not a fad, they’re a trend that has emerged out of the toughest crisis the MICE industry has ever seen. According to a recent eventsforce report, nearly 60…
5 Insurance Questions to Consider For Your Future Events
When you are planning for the conference or trade show of your dreams, the last thing you want is to be facing down the logistical nightmare of cancellation. But that’s…
Leverage Your Current Event to Build Attendance for Your Next Event
I’ve seen many changes in the tradeshow industry in the last 30+ years. With the advent and accelerated use of technology, the way we register attendees for an event has…
5 Things to Consider Before Hiring a Speaker for Your Virtual Event
With many events pivoting to virtual right now, event planners are working overtime to make sure their digital event programming is packed with premium educational content.…
What to Consider When Choosing a Virtual Platform for Your Event Audience
The coronavirus pandemic has been like a Class-5 hurricane through our industry. Mass event cancelations are creating a devastating wave through the event industry that is…