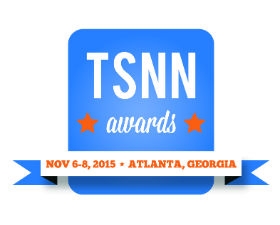 Have you voted yet for the TSNN Awards “Best of Show” nominees or submitted a nomination for the Show Manager of the Year awards? Both deadlines are this week!

Five shows were chosen for TSNN’s “Best of Show” award in which TSNN simply asked shows to tell us why they were the “best”.

Now, they need all of YOU to vote for which one you think deserves to be named the overall BEST show. The overall winner will be announced at the TSNN Awards in Atlanta Nov. 7.

The TSNN Awards honors the top 50 fastest-growing shows in the U.S. during a three-day weekend celebration.

Vote HERE today and tell us which one deserves to be honored with the “Best of Show” award!

Continuing the tradition of recognizing individual show managers across the industry, nominations are actively being sought for the 2015 edition of The Expo Group Show Manager of the Year Awards.

Since 2000, the crystal SMOTY obelisk has been presented to those people creating amazing experiences within their exhibition and convention.

“These awards began in order to honor show managers who make our industry great, who exemplify a can-do spirit,” said Ray Pekowski, president and CEO of The Expo Group.

He added, “I cannot stress enough that these awards are about the person, not the growth of their show, the associations they are in or even the size of their company, since we have several categories. Together we can recognize outstanding personal achievement in the industry.”

Nominations should be submitted by Sept. 30 at http://theexpogroup.com/e/AboutUs/SMOTY_Nominate.aspx

If you know a deserving show manager, please submit a nomination. Self-nominations are encouraged as well. Any individual responsible for the production of a trade or association show is eligible to win, regardless of any affiliation with The Expo Group.

Each winner receives the iconic crystal obelisk, a donation to their favorite charity and recognition industry-wide. Since 2000, more than $75,000 has been donated to various charitable organizations as a result of the SMOTY awards.

The SMOTY Awards will again be presented as part of the celebratory weekend of events surrounding the TSNN Awards (www.T-awards.com) and winners receive complimentary full access and travel to the awards, on tp Nov. 6-8 in Atlanta.