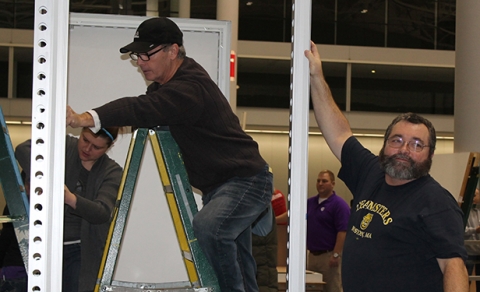 The goal of the program is to create more skilled workers while elevating Boston’s trade show business to match its bustling tourism industry, thus creating jobs and growing economic impact.

He continued, “Having an educated and well-trained workforce is critically important for Boston to attract the events that have the biggest economic impact. Making this training available will create more jobs, more visitor spending, and put more working men and women in a better position to support their families by working in this industry.”

By providing trade show workers with a chance to earn certifications and licensure in handling the various aspects of working in the trade show industry, the union hopes to cultivate a skilled workforce that will not only allow Boston to compete with first-tier trade show cities including Las Vegas, New York and Chicago, but also create more full-time employment opportunities, according to Teamsters Local 25 officials.

“This program is great for our members,” said Ed Welch, Teamsters Local 25 steward. “Giving these workers the chance to be fully trained and certified will open the door to many more job opportunities in this growing industry, and give them a much more reliable way to support their families.”

The initial four-hour training sessions took place Dec. 12 and 13 at the Boston Convention and Exposition Center, where instructors detailed the art of building and deconstructing trade shows quickly, efficiently and safely to 100 workers.

The program’s curriculum includes courses in customer service, decorating, systems, and I & D and freight foremanship, as well as first aid, CPR and OSHA 10, and Local 25 members are required to attend 16 hours of training over the first two years of the union’s Collective Bargaining Agreement, which went into effect in April 2017.

This new program is made possible by the union’s partnership with the convention and trade show employers working in conjunction with the Massachusetts Department of Public Safety and the Massachusetts Convention Center Authority (MCCA), which supports the training program in the hope that it will attract more lucrative events and help maximize the return on investment for Massachusetts residents and businesses.

“Customer service excellence is at the heart of the MCCA’s mission and our success is directly tied to our constant focus on providing training throughout the organization,” said David Gibbons, MCCA executive director.

He continued, “We applaud and appreciate the commitment of Teamsters Local 25 on its new training initiative as we continue working together to drive economic activity and opportunity locally by bringing the world’s best events to Boston.”

Trade Show Industry Growth Dips First Time in 25 Consecutive Quarters
The Center for Industry Research released its latest CEIR Total Index Report that indicated growth of the trade show industry declined during the fourth quarter of 2016.…
Urban Expositions Launches New Trade Show for Pet Industry
Filling the gap after Total Pet Expo closed its doors in Chicago, Urban Expositions will launch a new pet industry show - P3 | Progressive Pet Products. The show will be held…
Vinexpo to Launch First U.S. Trade Show in the Big Apple
Vinexpo, the international exhibition for wine and spirits professionals, is gearing up enter the world’s largest wine-consuming market with its first U.S. trade show.…
Trade Show Industry Q4 Growth Ticks Up 2.5 Percent: 1.9 Percent for 2018 overall
Despite headwinds, the Center for Exhibition Industry Research reports that the recent growth of the exhibition industry continued during the fourth quarter of 2018. The…
UBM Fashion to Launch First Consumer-Facing Fashion Trade Show, VINTAGE@Intermezzo
UBM Fashion is gearing up to debut VINTAGE@Intermezzo, its first-ever consumer-facing fair inside Intermezzo Collections, one of six fashion trade shows within the NY Women’s…
UFI Launches New Online Programming for Exhibition Professionals
The coronavirus pandemic may be keeping exhibition professionals away from one another, but the desire to connect, discuss and learn has only accelerated. To fill this need…