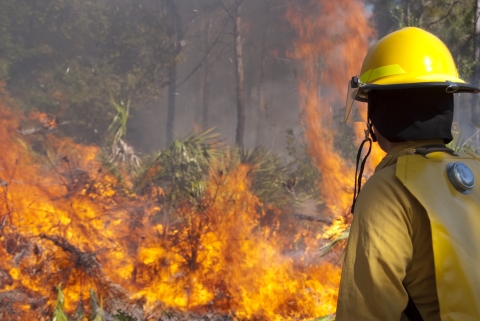 Most people trade show professionals know SmartSource Computer & Audio Visual Rentals as a technology provider within the trade show industry, but for the past 17 years,  they also have been providing service for something completely outside the business.

The company has been playing a critical role providing its technology to the National Interagency Wildland Firefighting Teams, who are leading the battle against  wildfires that have been raging in several U.S. Western states.

“So far this year, 39,254 wildfires have burned nearly 6.4 million acres in the U.S.,” according to the USDA Office of Communications.

SmartSource Rentals President and CEO Peter Handal said, “We are extremely proud of the confidence the National Interagency Wildland Firefighting Teams have placed in SmartSource Rentals and its ability to deliver technology that is helping this vital agency in its mission to protect and preserve the nation’s forests and grasslands.”

He added, “While its elite wildland firefighting team members are in a vigorous battle against intense wildfires, being able to help with the right equipment, delivered on a just in time (JIT) basis, is clearly something in which we take great pride. We are fortunate to have a team of people on staff willing to go above and beyond standard operations to support firefighters during this unprecedented wildfire season.”

For its part, SmartSource Rentals and its team of experienced Information Technology (IT) technicians, logistics experts and account managers, has been responding with a 24-hour turnaround in an estimated 85 percent of requests for equipment ranging from laptops and iPads to printers, related networking components and customization services.

The technology, all of which is custom-imaged and labeled for the National Wildland Incident Management Teams, includes a plug-and-play product that is used to provide dynamic and responsive planning in terms of updating GIS software to speed up reaction time in order to save lives, structures and acreage.

This product, and other technology provided by SmartSource Rentals, has been deployed across the U.S., from Alaska to Florida, and New York to California. Currently, it is being deployed by multiple National Incident Management Teams directing the firefighting effort across the five Western states of Idaho, Montana, Oregon, Washington and Nevada.

ABCOM Technology Group Acquires SmartSource Rentals
ABCOM Technology Group, a leading provider of IT and digital signage and part of the Dubin Clark & Company, Inc. portfolio, has acquired SmartSource Rentals, an event-…
SmartSource Donates Technology to Help Those In Need
SmartSource Computer & Audio Visual Rentals, provider of computer, audio-visual and technology solutions for businesses and events, has been going out of its way to help…
Lending a Helping Hand is the Heart and Soul of AFR Furniture Rental
Charity is an obligation, not an option, according to Jerry Hellmann, co-CEO of AFR Furniture Rental, a national furniture rental company that provides furnishings for homes…
Las Vegas Sands, SmartSource and Visit Anaheim Do Their Part to Help Those In Need
As the fall-out from the pandemic continues, it’s heartening to see trade show and event suppliers step up to help their employees, industry and communities be strong,…
5 New Technologies to Help Keep Events Safe
With the COVID-19 pandemic hanging over the event industry’s head for more than a year now, creating safe in-person meetings and conferences has become a laser point-of-focus…
Top Criteria for Selecting an Event Technology Solution Provider
Exhibitors and sponsors invest significant resources – financial and human capital – to make their presence at leading trade shows and conferences a success. In fact, event…