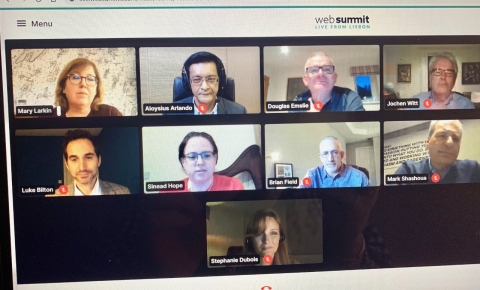 The Society of Independent Show Organizer recently collaborated not once, but twice, for its members in two valuable ways with Web Summit and its Founder and CEO Paddy Cosgrave.

The talk - "Is Virtual the new Emperor's clothes? - Lessons from taking a major event virtual” - focused on the transition of Web Summit – the mega-event for the tech industry that runs annually in Lisbon, Portugal – to a virtual event that ran Dec. 2-4.

“Following up on the excellent interview between Douglas Emslie and Paddy Cosgrave, discussing the online expansion of the Web Summit and their other events, Douglas was invited to participate in an online session during this month’s Web Summit, and SISO Members were offered complimentary registrations to attend the online event,” said David Audrain, SISO executive director.

He added, “So Doug’s initial idea of interviewing Paddy for the SISO Webinar series expanded into a number of added-value benefits to SISO members and the industry!”

The Web Summit panels focused on "How We'll Meet in 2021" and "Getting Past the Crisis of Gatherings", which Emslie spoke on, as well as IMEX CEO Carina Bauer and JWC Partner Jochen Witt.

“SISO has been very excited to have been working with Paddy Cosgrave and the Web Summit,” Emslie said.

He added, “We have had exceptional feedback from our members on Paddy’s SISO webinar last month. The event talks and roundtables at the Web Summit last week have given our members unique insight as to how technology will continue to change our industry. The Web Summit is clearly the place where event professionals should go to see the future technology trends.”

Roundtables focused on getting 'back to normal', hybrid events, lessons from virtual and re-shaping the events industry.

The roundtables included trade show industry professionals from around the world in engaging chat sessions directly with the panelists.

Here are a few key takeaways from the panels and roundtables:

To see the SISO Interview by Douglas Emslie with Paddy Cosgrave, click HERE.

Event Industry Leaders Collaborate to Establish Common Exhibitor Data Standards
Leaders from industry companies including CadmiumCD, EXPOCAD, Freeman, GES, Map Your Show and Personify A2Z Events are coming together to create a solution to a major problem…
UFI and SISO Launch Global Campaign to Support the Exhibitions and Events Industry
In the wake of Novel Coronavirus (COVID-19) resulting in a series of trade show cancellations worldwide, UFI, the Global Association of the Exhibition Industry, and SISO, The…
SISO Leadership Conference Features Hot-button Topics in Cleveland
The trials and tribulations of launching a new show, successfully leveraging digital, mapping the attendee and exhibitor journey, new tech innovation and utilizing content…
Virtual GMID Highlights Industry Collaboration Amid Uncertainty
More than 13,000 attendees came together online for Virtual Global Meetings Industry Day on April 14. While the message from industry experts was optimistic and hopeful, the…
Resiada Wins SISO’s Event Innovation Battlefield Competition
This year’s SISO Event Innovation Battlefield, featuring five event tech companies, was a fierce competition, but the audience of more than 200 trade show executives…
Atlantic City Pulls Out All the Stops for 175 Attendees to SISO’s Executive Leadership Conference
Atlantic City rolled out the red carpet, and then some, for 175 attendees to the Society of Independent Show Organizers’ Executive Leadership Conference, held Aug. 11-13 at…