Ray Bloom: Imex America Is a Go for November in Las Vegas 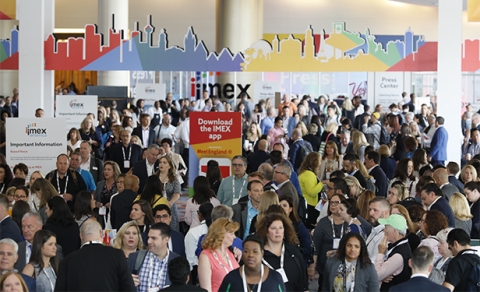 Proclaiming the industry is sick of virtual events, IMEX Group Chairman and Founder Ray Bloom reaffirmed that the company’s signature trade show, IMEX America, will happen as scheduled this November 9-11 in Las Vegas

“There is no doubt there,” said Bloom during Meetings Made Easy’s weekly Facebook Live session on Thursday.

The confidence in the event is welcomed news for events professionals eager to speed the recovery from COVID-19.

More than 13,000 attendees — planners, DMO representatives, hoteliers, vendors and more — converge annually in Las Vegas for the event. The grand scale of the trade show is awe-inspiring and incomparable to any other industry in this country.

“This is what I call the Super Bowl of events,” said Meetings Made Easy Founder and President Mike Ferreira, the Las Vegas-based event planner who moderates the weekly discussions with industry veterans.

As IMEX goes, so go events. Last year’s decision to cancel IMEX’s annual spring trade show in Frankfurt, Germany, was a sign of COVID’s severity. The group had little choice but to forgo the 2020 fall event in Las Vegas, and recently decided international travel would not be opened enough to return to action in Germany this year. This week’s pronouncement about IMEX America adds to the positive momentum felt throughout the trade show world.

“The rebuilding starts this year,” proclaimed Bloom. “It will take a few years to get to the levels prior to the pandemic, but that doesn’t matter. We want to get back to doing good business.”

IMEX is openly making the assumption that current group limitations will not be in place in November. If only 1,000 people could gather in total, with a maximum 250 in the same room, the show couldn’t take place, acknowledged Carina Bauer, CEO of IMEX Group and Bloom’s daughter.

Bloom and Bauer describe President Biden’s declaration that there will be enough vaccines for any American who wants one by May to be a turning point. “We can expect everyone who is going to have a vaccination in the United States to have one within the summer,” Bloom explained.

Las Vegas is already alleviating some of its restrictions, though not at the rate of states like Texas and Mississippi, which did away with mask mandates this week. Numerous event operators are counting on greater numbers to be allowed in Las Vegas by mid-May, mere weeks ahead of the massive World of Concrete expo (60,000 attendees normally) at the renovated Las Vegas Convention Center.

This year marks IMEX America’s first at the Mandalay Bay Convention Center. The event had been at the Sands Expo and Convention Center since its inception in 2011, but IMEX Group announced it would be moving to Mandalay Bay in 2021 weeks prior to the 2019 trade show. IMEX is booked at its new home through 2025.

IMEX America will technically be a hybrid event, with virtual tours of the showfloor and online-only interviews. “We’ve always done that,” Bauer said.

But Bauer was quick to point out that the digital aspects will pale in comparison to being in Las Vegas. “You can’t replace being there, unfortunately — or fortunately,” she said.

IMEX America Focuses on Going Green at October Event in Las Vegas
Attendees and exhibitors to this year’s IMEX America, on tap Oct. 13-15 at the Sands Expo & Convention Center in Las Vegas, will experience a show that’s even greener…
IMEX America Breaks Records Across the Board in Las Vegas
As the 5th IMEX America wrapped up in Las Vegas, records were broken across the board, with a total of 3,100 companies representing 150 countries exhibiting, including 80 new…
Largest Ever IMEX America Kicks Off in Las Vegas
Today is opening day for IMEX America 2018, the country’s worldwide exhibition for incentive travel, meetings and events. Held annually at the Sands Expo and Convention…
Cosmoprof North America Boasts a Record Event in Las Vegas
Cosmoprof North America, the annual trade show and conference for beauty professionals, saw growth across all categories at its 2014 event that took place July 13-15 at…
Imagination Is the Inspiration for IMEX America 2019
IMEX America, IMEX’s worldwide exhibition for incentive travel, meetings and events, will be held Sept. 10–12 at the Sands Expo and Convention Center in Las Vegas. Now in its…
IMEX Group to Serve Up Plenty of Green Education at Upcoming IMEX America
Show organizers will have an opportunity to find even more answers to their questions about sustainability and corporate social responsibility (CSR) at this year’s IMEX…