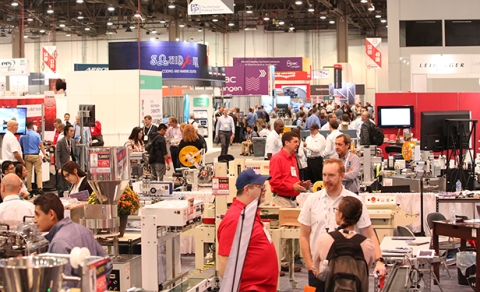 PMMI decided to delay the announcement to June 10 due to COVID-19, according to association officials.

PMMI originally filed the complaint against LogiChannel with the U.S. District Court for the Eastern District of Virginia on Jan. 15 after discovering it had used the PACK EXPO logo without permission and was otherwise misrepresenting itself as the official event producer, according to PMMI officials.

“This order represents a victory for associations and other trade show organizers that find themselves victims of trademark infringement and unauthorized vendors attempting to sell fake lists and other services,” said Laura Thompson, vice president of trade shows for PMMI. “Trade show exhibitors have a right to know the relationship between a company and the event producer when doing business. The circumstances are a sad commentary on the state of the ethics and conduct of some individuals and businesses.”

For more than a decade, fraudulent attendee list sales scams have become a common occurrence with large industry conferences and trade shows. According to IAEE President and CEO David DuBois, associations in particular are often targeted by rogue list brokers. Scammers use technology to illegally harvest attendee and exhibitor email addresses on an event website, then use the information to solicit unknowing exhibitors.

"The trade show community will not tolerate improprieties in this area."

“The goal of these bogus attendee list vendors is to aggregate and use public information in order to sell lists for profits – they don’t care about protecting the personal information nor the brand of the event,” DuBois said. “It is a bigger issue for association versus corporate events because associations are more willing to be public about their attendee and exhibitor lists [to] expand their participant audiences.”

To combat this problem, DuBois suggested that instead of using (often ineffective) cease-and-desist letters, show organizers should instead regularly remind event participants that only their organization can offer legitimate lists or access to their show’s attendees.

With the lawsuit now over, PMMI isn’t being complacent about what many in the events industry view as an unrelenting scourge. The association is continuing to warn and educate PACK EXPO participants about predatory companies falsely representing themselves as official trade show suppliers.

“This [lawsuit victory] is a win not only for PMMI and the PACK EXPO portfolio of trade shows but for all trade show organizers,” said Jim Pittas, PMMI’s president and CEO. “This latest court order sends a signal to all unauthorized vendors attempting to pass themselves off as legitimate trade show organizers and deceive exhibitors and other suppliers. The trade show community will not tolerate improprieties in this area.”

An Investigation into Fake List Vendors
Trade show organizers have a new problem. Rogue list brokers are targeting their exhibitors, claiming to have access to the official attendee list. We began seeing this more…
5 Tips for Working Better With Vendors
Event production is an incredibly diverse and creative field, bringing together many moving parts, each with their own requirements and needs. From efficiency and…
Meorient Lists on Shenzhen Exchange
Meorient, a Chinese exhibition organiser, has listed on the Shenzhen Stock Exchange (SZSE). The company debuted on the exchange on 22nd October. Meorient’s stock code is…
Convention Centers Transform Into Hospitals in the Fight Against COVID-19
After closing their doors to trade shows and events due to the coronavirus pandemic, many convention centers across the U.S. are taking on an entirely different role. This…
JEXA Protests Against Temporary Closure of Tokyo Big Sight
The Tokyo Metropolitan Government’s (TMG) plan to close Tokyo’s largest purpose-built exhibition venue, Tokyo Big Sight (TBS), during the 2020 Summer Olympics has led to…
USPOULTRY Awarded $750,000 In Damages Against Convention Hotel Poacher
Hotel room poachers may think again before ruffling the feathers of the U.S. Poultry & Egg Association (USPOULTRY) and its annual trade show and conference, the…