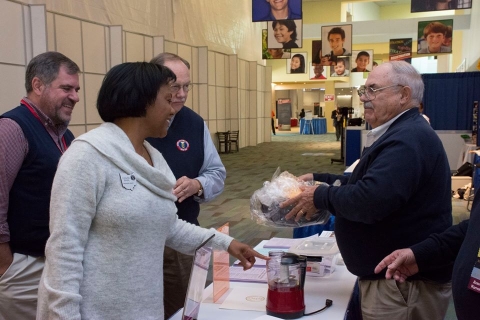 “This is the time that we get to shine for our members,” said Jeff Chambers, OSBA director of Communication Services.

Among the highlights were the18th annual Student Achievement Fair, featuring five performing groups representing each of the OSBA regions, an artwork exhibition and 100 student groups sharing their innovative ideas for school board members to explore.

“Our members keep coming back even when budgets are tight because of the experience they get here when they arrive,” said OSBA Deputy Executive Director Rob Delane.

Here were some of the general session speakers:

Ernie Hudson, known for his roles in the “Ghostbusters” and “Miss Congeniality” movies and HBO’s “Oz” series, traveled a difficult road to success and will speak about “Overcoming Odds and Adversity.”  Guided by his grandmother, he grew up in the housing projects of Michigan following the death of his mother when Hudson was only two months old. Hudson has also served in the Marine Corps and attended Yale University. Though a father was absent from Hudson’s life, Hudson has raised his own sons as a single father.

“The Difference Board Members Can Make in the Lives of Children” was the topic shared by actor Steven Michael Quezada, winner of the Screen Actors Guild Award for his role in the “Breaking Bad” television series. He is an elected member of the Albuquerque Public Schools Board of Education and has involved students from the Digital Arts & Technology Academy in Albuquerque in his talk show.

“From Grits to Glitz: How I Fell Off the Okra Truck and Onto the Red Carpet” was the topic shared by Emmy-winning journalist and New York Times best-selling author Leeza Gibbons. Known for covering issues involving family caregivers, she founded the Leeza Gibbons Memory Foundation when Alzheimer’s disease touched her family.

Additionally, “The 3 Ds of Success” was presented by two-time Heisman Trophy winner Archie Griffin, senior advisor to The Ohio State University Office of Advancement, at the OSBA Conference Luncheon.

“The OSBA Capital Conference and Trade Show is considered Ohio’s premier continuing education program for school board members and we are excited to share our newly renovated ballrooms, meeting rooms and other amenities with this group,” said GCCC General Manager John R. Page before the event.