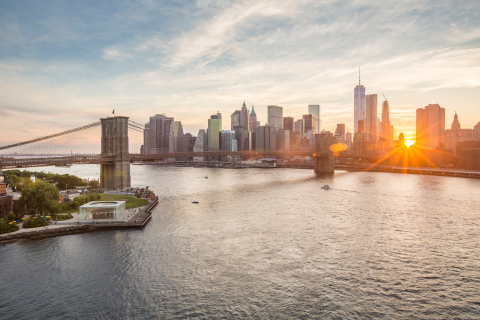 NYC & Company, the official destination marketing organization and CVB for New York City’s five boroughs, is aiming to get event professionals in a New York state of mind. The organization recently unveiled “It’s Time to Make It NYC,” a marketing and sales initiative designed to highlight the city’s vibrant comeback and major new developments and invite event professionals to choose the destination for in-person gatherings.

“This new campaign is a signal to planners and [organizers] everywhere that it’s time to return to NYC for face-to-face meetings, conventions, trade shows and events,” said Fred Dixon, president and CEO of NYC & Company and co-chair of the Meetings Mean Business Coalition, who noted that the city’s best-in-class COVID-19 protocols, including a new vaccine mandate for indoor activities, make it one of the safest places to do business.

Dixon explained that with New York City’s standing as the capital of business and commerce for the nation, and in many ways the world, it is an ideal backdrop to host world-class events, while the energy of the city and the plethora of new developments and cultural opportunities make it one of the best times to meet in the destination.

“Whether it’s fashion, art, finance, advertising, insurance, pharma, you name it, New York is at the center of all those conversations,” Dixon said. “Plus, there is so much that has happened in terms of new infrastructure, new venues, new products and cultural offerings like the reopening of Broadway, so it’s a great time to create an event in New York and take advantage of all that excitement.”

Event professionals can engage with the campaign using the hashtag #ItsTimeToMakeItNYC.

Earlier this year, NYC & Company also teamed up with the Partnership for New York City and New York City Economic Development Corporation (NYCEDC) to launch another campaign to bring business back to the city: “Commit to the Comeback: Meet Local NYC,” targeting the local community.

Picking Up the Pace

The new initiatives and new developments are paying off well, according to Dixon.

“We're heading into the fall with great momentum, lead volume is picking up and there are so many events that are happening again in New York City,” Dixon said, pointing to all of the events that have been held or are on the books at Javits Center, which reopened in August following a $1.5 billion, 1.2 million-square-foot expansion.

The project included 90,000 sq. ft. of new exhibit space, which brings the center’s total to 500,000 sq. ft. of contiguous exhibit space on one level; 107,000 sq. ft. of meeting space; 113,000 sq. ft. of pre-function space and a 480,000-sq-ft. truck marshaling facility. Javits Center also added new rooftop spaces are also in the mix, including a pavilion that can accommodate 1,500 people, an outdoor terrace and a greenhouse and a one-acre farm, where produce is grown for the convention center’s banquet operations.

Since reopening, Javits Center has successfully and safely hosted major trade shows and events. All event organizers, contractors, exhibitors and attendees are required to show proof of vaccination to enter the facility as part of the city’s new mandate. Javits Center has also implemented a number of infectious disease prevention measures in the new and existing buildings, such as installing HEPA filtration systems, becoming GBAC STAR-certified by the Global Biorisk Advisory Council to maintain strict cleaning and disinfection protocols, and replacing water fountains with water bottle dispensers.

In addition to the Javits Center expansion, New York City’s hotel landscape continues to evolve. With properties coming back online after closing due to the pandemic, the city currently has roughly 100,000 hotel rooms in active inventory to accommodate delegates and is expected to boost that count to 110,000 by the end of 2021, as more hotels reopen along with new projects. Numerous new properties with meeting and event space have opened or are scheduled to by the end of the year. New hotels include Arlo Midtown, Graduate Roosevelt Island, Margaritaville Resort Times Square, Ace Hotel Brooklyn and Pendry Manhattan West. Properties by Aman, Virgin Hotels, Motto by Hilton and The Ritz-Carlton (New York City’s second) are still set to open this year.