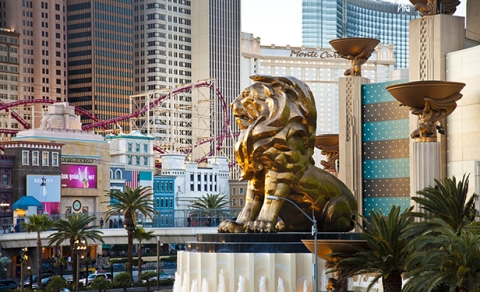 As part of its contribution to the campaign to fight the global crime of human trafficking, MGM Resorts International recently awarded $250,000 to the McCain Institute for International Leadership at Arizona State University.

Founded in 2012 and inspired by the public service of Senator John McCain and his family, the nonpartisan think tank will use the gift to fund several initiatives designed to aid the vulnerable population of homeless youth and provide prevention measures.

“We are so grateful for the support of MGM Resorts International,” said Cindy H. McCain, who serves on McCain Institute’s Human Trafficking Advisory Council. “This contribution allows us to deepen our work to protect our communities’ most at-risk and vulnerable citizens from exploitation and abuse.”

She added, “Partnerships like these take us one step closer to the day when no man, woman or child finds themselves ensnared in modern day slavery.”

Among the initiatives that will be funded include:

She continued, “These children and teenagers are at great risk for human trafficking and other forms of exploitation. To address this critical need, we are working to better equip those serving runaway and homeless young people so that they can help us prevent and end the exploitation of youth in transition.”

Human trafficking is among the world’s most widespread crimes, according to the International Labour Organization. The U.N. agency’s most recent statistics, measured in 2016, found that an estimated 40.3 million people were trapped in modern slavery, including 24.9 million in forced labor and 15.4 million in forced marriage.

According to a 2017 report titled Global Estimates of Modern Slavery: Forced Labour and Forced Marriage, women and girls are disproportionately affected by forced labor and account for 99 percent of victims in the commercial sex industry and 58 percent in other sectors.

The generous donation is another important milestone in MGM Resorts’ anti-human trafficking efforts. In March of this year, The MGM Resorts Foundation donated $10,000 each to three nonprofits – the Embracing Project/The Center 4 Peace, SEEDS of Hope and The Rape Crisis Center – that provide services to victims of human trafficking.

The gaming and hospitality company is also an active participant in the Southern Nevada Human Trafficking Task Force, a collaboration led by the Las Vegas Metropolitan Police Department among local, state and federal law enforcement and members of the business, non-profit, faith-based and general communities to coordinate anti-trafficking strategies, share best practices and raise awareness about trafficking prevention and detection.

In addition, MGM Resorts trains its security officers and other customer-facing employees across its properties to identify potential trafficking victims and respond appropriately.

In 2017, the Federal Bureau of Investigation recognized ARIA Resort and Casino Security Department for its humanistic approach to potential trafficking victims with the Director’s Community Leadership Award, created in 1990 to honor individuals and organizations for their efforts in combating crime, terrorism, drugs and violence in the U.S.

Recently, MGM Resorts International affiliate MGM MACAU was named a top 15 global finalist for the Stop Slavery Award by the Thomson Reuters Foundation, the philanthropic arm of the news and information provider.

She continued, “We believe in an interdisciplinary approach to the issue, partnering with law enforcement at all levels, as well as governments, nonprofit social service and other organizations, businesses and communities at large. Our gift to the McCain Institute for research and development of best practices represents another dimension of our efforts.”

PCMA Makes Commitment to Help Eradicate Human Trafficking
As part of its new vision that business events can be the drivers of social positive change, PCMA has committed to combat child exploitation by signing The Code of Conduct…
MGM Resorts International Launches Food Donation Program to Fight Hunger
MGM Resorts International launched a new standardized program for the safe collection, preservation and service of surplus banquet food in a long-standing effort to reduce…
ConferenceDirect Empowers Its Employees to Help Stop Human Trafficking
Last month, full-service global meetings solution company, ConferenceDirect, provided 23 of its associates with the opportunity to learn how to identify and help stop a…
Want to Combat Human Trafficking? Get Involved with 20BY20!
To help draw attention to the serious issue of human trafficking, ECPAT-USA, part of ECPAT International — a global network working to eradicate sexual exploitation of…
Caesars Entertainment and ImpactLV Launch Fund to Support Victims of Human Trafficking
In an effort to help Southern Nevada’s vulnerable populations, Caesars Entertainment has launched The Shared Future Fund, a first-of-its-kind investment model that will be…
MGM Resorts, Sydell Group Unveil Plans for New Conference Space at Park MGM in Las Vegas
Out with the old and in with the new. Nowhere has that expression been more accurate than in Las Vegas, where hotel and meeting space makeovers practically are routine.…