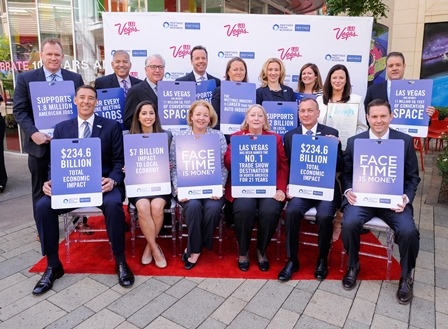 NAMID is an expansion of the successful efforts in Canada who have for 20 years held the annual Canadian National Meetings Industry Day.

The MMB coalition members, in addition to industry leaders across in Canada and Mexico, hosted events in communities all across their respective countries.

Michael Dominguez, MMB’s co-chair and senior vice president of corporate sales at MGM Resorts International, said, “We are excited to be involved in such a meaningful day that unites our industry not only across the United States, but also across Canada and Mexico, communicating the critical role in connecting people and driving positive business results through face-to-face interaction. Across the continent we are demonstrating how meetings build personal relationships, drive positive outcomes and support strong communities.”

Here are just a few of the events held today:

·         In Nevada, Caesars Entertainment worked with the other major players in the meetings and events industry to bring awareness of NAMID through a press rally in Las Vegas. The rally will included a proclamation by the Clark County Commissioner officially declaring today North American Meetings Industry Day.

·         In Wisconsin, Meetings & Incentives Worldwide joined forces with local partners, clients, and associates to host an educational session for industry leaders in the pharmaceutical and healthcare sectors. Earlier this month, M&IW petitioned Scott Walker, governor of the state of Wisconsin, and Tom Barrett, mayor of Milwaukee to issue proclamations in support NAMID – both of which were approved.

·         In New York, NYC & Company took to social media and issued a new video on why face-to-face meetings are so critical. The company also has placed a new ad to promote NAMID in the heart of the city – Times Square. Later today, American Express Meetings & Events will host an “Educate to Elevate” event, including a series of continuing education and enrichment sessions.

“North America Meetings Industry Day is a true testament to the strength of not only the industry’s leadership but also its grassroots supporters. Across North America thousands who work in the industry and know firsthand its value and strength are standing up to make sure that elected officials, business leaders and other decision makers understand the important role face-to-face meetings play in generating business success, creating jobs and driving economic growth,” said David Peckinpaugh, fellow MMB co-chair and president of Maritz Travel.

At the Las Vegas event, Commissioner Weekly presented Chris Brown, executive vice president of conventions and business operations of National Association of Broadcasters, with the Key to the Las Vegas Strip during a press event at The LINQ.

NAB Show, which just wrapped up at the Las Vegas Convention Center bringing an estimated 100,000 attendees, is just one of the more than 22,000 meetings, conventions and trade shows that happen in Las Vegas every year.

"Tourism is the economic engine that drives this town and the meeting industry plays a significant role," said Clark County Commissioner Lawrence Weekly, chairman of the LVCVA Board of Directors.  "The 5 million-plus people who come to Las Vegas every year for a meeting, convention or trade show, help fill hotel rooms during mid-week, they support jobs and they significantly contribute to the local economy."

Visit NAMID at www.MeetingsMeanBusiness.com to learn more about local events planned across the United States, Canada and Mexico today. Follow and participate in the digital conversations at @MeetingsMeanBiz on Twitter and by using the hashtags #MMBusiness with #NAMID. Download the MMB app, available on iPhones and Android devices, to access industry resources and to stay updated on NAMID activity as it develops over the course of the day.

Las Vegas Leaders Gather for Inaugural 2016 Global Meetings Industry Day
Las Vegas top meetings and convention experts came together April 14 to celebrate the first Global Meetings Industry Day (GMID) at the newly opened T-Mobile Arena. The event…
Meetings and Events Industry Leaders Unite Around Coronavirus Concerns
The following is an open letter dated March 5, 2020, from the leadership of the American Society of Association Executives; Destinations International; Events Industry…
Event and Tourism Industry Leaders Show Their Support for Social Change
An army of events industry leaders is taking a stand to promote diversity, equity and inclusion. Take a look:  Reed Exhibitions On Jan. 15, global event producer Reed…
Industry Leaders Make Compelling Case for Full Return of Business Travel and Events
In what was perhaps the strongest argument to date calling for the full return of in-person professional gatherings, leaders from the business and travel sectors joined…
Event Industry Leaders to Converge at TRANSFORM USA
Transform USA has lined up an impressive array of event industry leaders to lead panel discussions and break-out sessions at its upcoming event, set for July 18 at the…
Travel Leaders and U.S. Department of Commerce Meet to Foster Industry’s Recovery
The U.S. Travel Association led a delegation of 11 travel industry leaders to Washington, D.C., March 8 for a roundtable discussion with U.S. Deputy Secretary of Commerce Don…