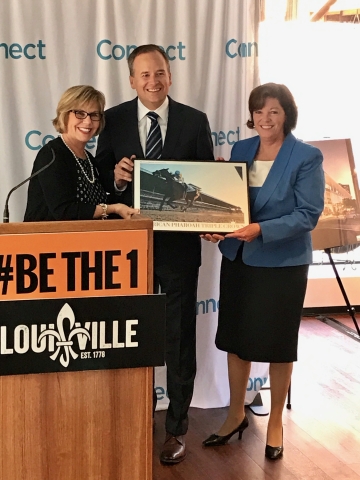 Connect Marketplace is a leading event in the meetings, events, travel and tourism industry and will be held in Louisville Summer 2019.

"We are more than excited to partner with our friends at Louisville CVB by bringing our largest Connect event of 2019 to its unique and inviting city," said Chris Collinson, president of Connect.

He added, "Connect Marketplace will give more than 2,000 planners a first-hand experience of the newly expanded Kentucky International Convention Center. What better way to showcase Louisville than to host the most active planners in the industry."

The announcement was made Sept. 21 at the Louisville Visitor Center during a press conference organized by the Louisville Convention & Visitors Bureau.

Presented by Connect Meetings, Connect Marketplace will be held Aug. 22-27, 2019, at the Kentucky International Convention Center.

The event has an estimated economic impact of $6.68 million. The last time Louisville hosted Connect Marketplace was 2010.

“We are pleased that the team from Connect Meetings has selected Louisville for its 2019 Connect Marketplace,” said Louisville Mayor Greg Fischer.

He added, “This is a time of great transformation for our city, and we’re proud to host the meeting industry’s top event professionals and give these decision-makers a front-row seat to the nearly $1 billion in tourism-based infrastructure improvements underway here.”

“We are thrilled to have the opportunity to once again showcase the city of Louisville to such an important audience,” said Karen Williams, President and CEO of the Louisville Convention & Visitors Bureau.

She added, “Hosting Connect Marketplace 2019 will support our mission to continue attracting world class industry trade shows in Louisville. This will be the second time Connect Marketplace has been to Louisville, and we plan to take every opportunity to show off the best our city has to offer.”

The expansion of the Kentucky International Convention Center will include 200,000 square feet of exhibit space and a 40,000-square-foot ballroom. The project is estimated to increase national meetings and conventions opportunities for Louisville by 25 percent.

Connect Marketplace is just the latest in a series of events announcing they will be heading to Louisville, including the International Association of Exhibitions & Events Expo! Expo! (2020), TEAMS Conference & Expo (2018) and TSNN’s very own TSNN Awards (2018).

Connect Marketplace 2019 Descends on Louisville
Around 4,000 industry professionals will converge in Louisville, Kentucky, this week for Connect Marketplace, a trade show and conference for those who work in meetings,…
Louisville Hosts Hybrid Event for Planners to Highlight Capabilities, Safety Measures
With more and more planners looking at a hybrid model for their meetings, Louisville Tourism and its industry partners showcased their ability to host such an event while…
New ExpoIQ Marketplace Connects Technology Events and Exhibitors
ConferencePulsehas relaunched as ExpoIQ, a marketplace that helps technology event organizers find and connect with the right exhibitors for their events. The new platform…
Eventerprise 5.0 Enables Reviews and Quotes to Connect Event Planners and Suppliers
Eventerprise, a digital event platform that connects event organizers with event suppliers, including products, services, planners and venues, has released a new version of…
A Planner’s Health Safety Checklist for Live Meetings and Events
As the meetings and events industry continues to navigate the shifting post-pandemic landscape, planning and integrating the multitude of health safety updates will become…
Connect To Converge In Motor City Next Summer
Meetings, events, travel and tourism industry leader, Connect, is gearing up to welcome a pre-pandemic number of event professionals to its signature summer marketplace…