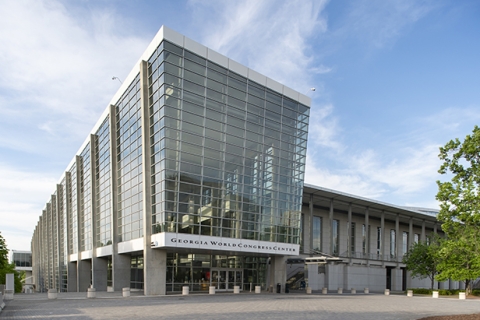 Since the pandemic brought the live events industry to a screeching halt one year ago, convention center staff across the country have been working overtime to find creative ways to keep their spaces occupied and employees working. Some have repurposed their expo halls into overflow COVID hospitals or mega vaccination sites, while others have been able to host smaller, socially distanced events, depending on the health and safety criteria in their state. Then there are those venues that have been in the fortunate position of being able to attract alternative kinds of business to keep their lights on and employees on the job.

Case in point: the Georgia World Congress Center in Atlanta has been hosting an array of film and TV production business since COVID emptied its events calendar last spring.

According to Lidija Ahmetovic, sales manager of the Georgia World Congress Center Authority the facility’s TV and film business has been booming since June 2020. She said 19 productions either filmed or are confirmed to film there, and approximately 10 more opportunities are in the pipeline. The facility receives an average of about two leads per week.

“Due to trade shows and meetings cancelling and rescheduling, we’ve had more space to offer productions looking to film,” Ahmetovic explained. “GWCC has always been a popular location because of our space, but due to our busy roster of events, it was just hard to coordinate with filming schedules.”

Ahmetovic added that because of the pandemic, film and TV productions are having to use more space than they normally would in order to accommodate new mandatory protocols such as social distancing. And few spaces are as large and versatile as a convention center, particularly GWCC.

“GWCC has more than 1 million square feet of contiguous exhibit space, making it the perfect venue to accommodate any need,” she said. “Likewise, with the majority of our team members working remotely, we are able to repurpose offices, hallways and internal gathering spaces that otherwise wouldn’t be available.”

She added, “Also, the fact that our exhibit halls are a blank canvas gives [productions] a lot more room on the creative side and they can use it for whatever they want.”

So how did the GWCC get so lucky? The facility’s relationship with the $9.5 billion Georgia film and television industry dates back to the early 2000s, when the GWCC and the (now-demolished) Georgia Dome began attracting minor shoots. But it wasn’t until 2011/2012 when the Georgia Film, Music & Digital Entertainment Office, a division of the Georgia Department of Economic Development, reached out about filming “Hunger Games: Catching Fire” at the facility, that things, well, began to catch fire.

At the time, Georgia didn’t have the state-of-the-art soundstage facilities that it has today, so there was a need for the kind of large and flexible spaces that the GWCC possessed.

“We were able to move some trade shows around and that’s how it all started,” Ahmetovic said. “Adding an additional revenue stream made good business sense, plus it drives awareness to our meeting planner audience.”

The facility quickly discovered that production companies were attracted to the venue’s 3.9 million square feet of film-friendly spaces, ranging from exhibit halls and ballrooms to tunnels, parking decks and outdoor spaces such as Centennial Olympic Park.

Some of the more popular films, TV shows and commercials that have been shot at the convention center include “Spider-Man: Homecoming;” “Baby Driver;” “Venom;” “MacGyver;” “Sleepy Hollow;” “The Game” and The Rock X Siri Dominate the Day.

With Georgia now ranked as one of the busiest shooting locations in the world, being able to lure in this lucrative business to supplement its bustling meetings and trade show schedule has proved to be a huge side benefit for the GWCC. But now, with the event industry on pause, that side business has become a bigger focus, not to mention a lifeline for the facility’s hard-working staff.

“With the majority of meetings and trade shows canceled or rescheduled, the last nine months have provided us the opportunity to host the film and television industries like never before,” Ahmetovic said. “By doing so, it has brought in unplanned revenue and helped to keep many of our team members working. Our ability to partner with the film and television industries truly has brought optimism and reassured us that things are on a positive track to recovery.”

So what will happen to all this “Y’allywood” business once events and trade shows return full force to the GWCC? Ahmetovic believes the facility’s long-standing, successful working relationship with the film and TV industry will continue for years to come, pandemic or no pandemic.

“Film and television is part of our fabric and we are grateful that productions continue to keep GWCC top-of-mind,” Ahmetovic said. “This, along with several other opportunities we have been able to cultivate during the pandemic, are what have kept our doors open and team members working in a time when a lot of our colleagues in the hospitality industry have been out of work.”

She added, “As we wait for meetings and events to return to campus, word has gotten out in the film and television industry that GWCC is available. Availability, coupled with our ability to be flexible and offer unparalleled spaces, creates a win-win for everyone.”