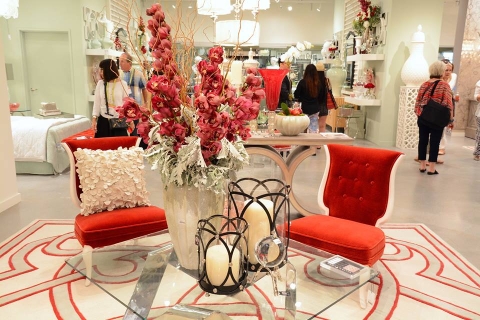 Las Vegas Market has expanded its temporary exhibition space - known as The Pavilions at Las Vegas Market - with the addition of a second location, which is a 50 percent gain in exhibit space for the Winter 2016 Las Vegas Market, on tap Jan. 24-28 at World Market Center Las Vegas.

“Last August’s repositioning and reimagining of temporary exhibits to The Pavilions at Las Vegas Market was met with an overwhelmingly enthusiastic response from buyers, which has fueled record rates of exhibitor renewals,” said Dorothy Belshaw, president of Gift & Home Décor, International Market Centers.

She aded, “The Pavilions at Las Vegas Market are an important component of our overall strategic reorganization of the Las Vegas Market, which has become the leading buying platform for furniture, home décor and gifts in the western United States.”

In total, a record 430-plus exhibitors are expected to be featured in the two venues this winter.

In Pavilion #1, key changes to the exhibit floor will include the launch of a new, 5,500-square-foot juried luxury section within HOME; double-digit growth within GIFT, specifically in  tabletop, gourmet housewares, stationery, publishing and souvenir categories; significant expansion of HANDMADE; and continued curated growth in DESIGN.  Other changes in Pavilion #1 include the creation of dedicated seminar space within the exhibit hall, with plans for daily presentations; and the addition of a bar within DESIGN, to allow buyers to relax and enjoy refreshments while shopping the expanded temporary offerings.

Based on the success of the summer 2015 launch, DISCOVERIES: The Antique Vintage Marketplace is expanding into Pavilion #2, to accommodate a record number of returning vendors as well as a significant number of newcomers.

Growth categories within DISCOVERIES include antiques, with newcomer Charleston Antique Mall bringing 8 to 10 dealers; returning exhibitors Arbor Antiques International expanding to present 12 dealers, including John Lane of Vintage Studios. Growth also is coming from smaller vintage exhibitors, including suppliers of repurposed, recycled and “shabby chic” products, with an estimated 10 to 15 percent expansion in this area.

Other highlights of Winter Market include continued expansion in the gourmet, housewares and casual/outdoor furniture categories; enrichment of better home décor offerings; and the enhancement of top furniture resources, and leading gift and lifestyle vendors. Beyond exhibits, the Winter Las Vegas Market will present a variety of special events, educational programming and buyer amenities.