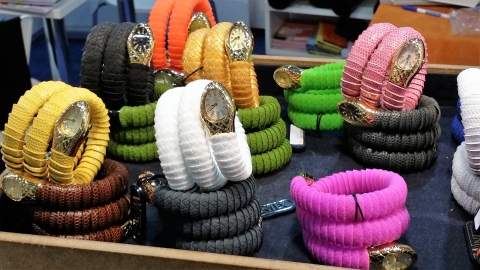 JCK Las Vegas, the flagship show of Jewelry Market Week, began its 2016 show June 3 with a revamped shopping experience utilizing the new expansion of the Mandalay Bay Convention Center.  From the new entrance straight from the parking lot to a redesigned floorplan, it sparkled with jewels and inspiration.

“We had to move 2,000 companies this year because of the upgrades to the Mandalay Bay Convention Center,” said Katie Dominesey, industry Vice president for JCK Las Vegas and JCK Tucson.

She added, “However, we were methodical in placing each product neighborhood and which companies belonged there to ensure the ease of shopping for the buyer. It was important to us that once a buyer finds their desired product neighborhood that the message is consistent and there’s a collection of brands in that area that fit into that identity.”

One new addition was the Bridge neighborhood area, home to fashion jewelry that is more cost conscious, although stylish. The re-imagined Design Center now features three tiers of exhibitors: Kickstarter, Rising Star and Resident, all getting a chance to connect with qualified buyers.

New on-the-show floor programming included “JCK Showcase”, which was at the very front of the new entrance that featured stylists and other influencers and how they merchandise,

Dominesey said. “The feedback has been positive, especially from large brands like Swarovski and Stuller, and solidifies JCK as the destination for US jewelry trade buying.”

A big draw at the massive Italian jewelry industry’s pavilion “VicenzaOro Italian Passion. Made With Love” was a trends display and insightful forecasting talks by industry experts.

JCK Las Vegas came on the heels of LUXURY, a three-day invitation only-event that took over the Mandalay Bay’s ballrooms and a day-long JCK Talks Education Program. For those looking for immediate delivery, the new JIS Exchange was launched at the nearby Tropicana Hotel.

Many exhibitors commented on the disappointing Basilworld Show earlier this year, attributing slumping attendance to Europe’s woes. At the same time, they noted the strong traffic at JCK Las Vegas and an uptick in orders. “Where customers used to order two pieces they now order three,” said exhibitor Roger Pessah with San Francisco-based Elliott Chandler Design.

JCK’s footprint stood at 485,000 net square feet, comparable to previous years with Luxury’s expansion to an additional ballroom in 2016. The show attracted around 21,900 buyers and featured 2,100 exhibitors.