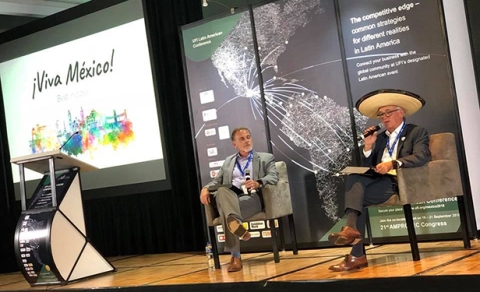 The inaugural UFI Latin American Conference presented a golden opportunity for participants to discuss common strategies for the different realities of doing business in Latin America. Held Sept. 18-19 at the World Trade Center in Mexico City, the new event attracted 120 delegates from 16 countries and was collocated with the 21stedition of the AMPROFEC International Congress.

“This conference exceeded our expectations as UFI’s first-ever major event focused on Latin America,” said Pepe Navarro, general director of E.J. Krause Tarsus de Mexico and UFI Latin America Chapter Chair. “It is great to see that the work we have put into this together with the UFI team has paid off.”

The event featured 14 speakers from across the Americas, who shared their insights and experiences with the audience, while deep dive sessions and networking breaks provided time for focused conversations and further discussions.

With the conference taking place on the anniversary of the 2017 Mexico City earthquake, the event’s opening session focused on the way exhibition organizers and venues react to these kinds of events, from earthquakes and hurricanes to health scares.

Another key session titled “Expos in Times of Crisis” focused on the ups and downs in Latin America, with industry leaders from the region sharing how economic and monetary crises have influenced the exhibition industry, and what lessons and positives the industry can garner from these challenges.

A common statement heard throughout these sessions was that trade show organizers in Latin America are probably the most experienced global industry experts when it comes to flexibility and the ability to respond to and overcome crisis situations.

The conference closed with technology expert and investor Marco Giberti, CEO of Vesuvio Ventures talking about what impact digital disruption might have on the exhibition industry.

“As the number of UFI members in Latin America is growing steadily, we are very happy that we can expand our services and activities here,” said Kai Hattendorf, managing director and CEO of UFI, which regularly organizes regional conferences around the world as a core activity.

He continued, “One year ago, we were able to bring in Ana-Maria Arango as Regional Manager and open our regional office. Now, less than twelve months later, we have already organized our first major event for the region. We look forward to working with the industry and associations in the region to offer broader support for their businesses.”