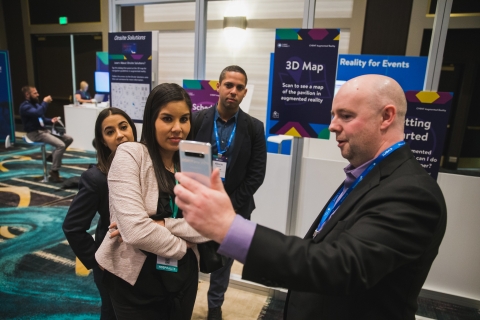 Google is one key beneficiary and driver of voice tech: Voice searches account for 20 percent of queries on Google mobile app and Android devices, according to Google CEO Sundar Pichai’s Google I/O keynote in 2016 — and that volume continues to grow.

More recent data from Statista Digital Market Outlook shows approximately 260 million smartphone users in the US in 2019. One in two of them use voice apps, while one in three of those use them daily, according to comScore’s Future Of Voice Report.

Event organizers are taking note, as voice technology allows them to deliver personalized attendee experiences in a scalable way. We spoke with one search-marketing consultant and two event technology providers to learn how.

Consider The User’s State Of Mind, and Google’s Goals

Trade show marketers can increase the likelihood of showing up in Google by catering to voice searches. Google has recently introduced features such as the “featured snippet” and “people also ask” box as part of its goal to answer user queries directly on its site. Events can increase exposure and site traffic by answering questions attendees are already asking Google.

“To start, be clear on your audience — who you want to attract,” says Cyndi Masters, CEO and Founder of DBS Interactive, a digital agency in Louisville, Ky. “Let’s say you’re a furniture show and you’re trying to attract retailers. The first thing you want to do is keyword research to see how people are searching for those types of events.”

Masters recommends browsing the free keyword.io and answerthepublic.com to learn how people are searching for events. Google’s “people also ask” box also gives a look into what phrases people are using to search. For example, if someone asks, “What’s the closest furniture show near Chicago this year?” and you provide relevant content to that question, you are more likely to show up in voice search and featured snippets in Google.

Success with voice search requires technical expertise, says Masters, since it relies on a code called schema markup that helps Google’s algorithms understand a website. “Many of the ad agencies [event organizers] work with are unlikely to have the technical expertise to help with this, so ask if they have the capability to do schema markup, she says. “Making websites ADA compliant also improves voice search, and requires a similar technical skill set.”

It’s important to ensure technology advances your event goals, says Jim Abramson, vice president of product management for Cvent. For example, if your goal is to free your event team from manning a concierge booth, voice tech could help — but consider whether it will engage the audience, or result in more confusion and questions.

“Sometimes trying it out at a small event or as an addition will help drive adoption and ease attendees into the idea that they can talk to a machine to get their questions answered more quickly and efficiently,” says Erica Stoltenberg, corporate communications manager at Cvent.

Exhibition technology firm EXPOCAD is in the early stages of integrating voice technology in its show design software. “We taught Alexa how to book and increase space size with voice commands in EXPOCAD, and showed it off at Expo! Expo! in December 2018,” says Rich Stone, CEO of ACT/EXPOCAD. “We programmed it so show management or exhibition sales could say, ‘Rent booth 117 To Sony Corporation,’ and it worked.”

One downside is that Alexa can be easily distracted with external noise. “On a show floor, you have to get pretty close for Alexa to hear — you and I [may] have no problem filtering sounds as a human, but Alexa does,” says Stone.

Voice recognition is also expensive to customize for individual shows; it took a few days for EXPOCAD to program Alexa to understand industry lingo and proper names. “We couldn’t just say, ‘Panasonic”; we had to program it,” says Stone.

Despite these downsides, Stone remains bullish. “Voice recognition is slick and it’s sexy,” he says. “There hasn’t been industry-wide proliferation [yet], but as we move forward, I would expect to see more of these type of applications on event floors.”

Have you experimented with voice on your show floor? Tell us how on Twitter, @tsnn_com_US.