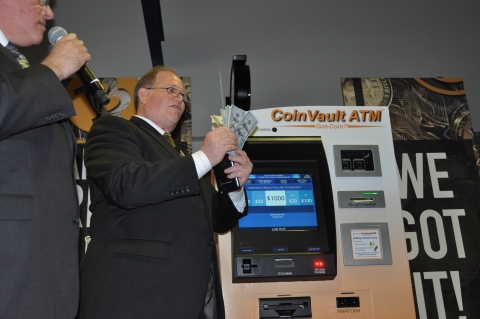 Setting a trend on its own, Houston’s George R. Brown Convention Center will be the only venue of its kind to offer access to digital money onsite.

A CoinVault ATM has been installed on the second level of the GRB, near the convention center’s popular Starbucks location.

Bitcoin, the most widely used and well known form of cryptocurrency, is a decentralized digital money system that is distributed worldwide. Unlike traditional currencies, such as the U.S. dollar, bitcoin is issued and distributed without any central authority.

“The George R. Brown is enormously proud to be an early adopter in this important new global technology, leading the way for other conventions centers throughout the world,” said Dawn Ullrich, president and CEO of Houston First Corporation, the parent organization that manages Houston’s downtown convention center.

“We are not doing this as a money-maker; this is revenue neutral. We view this as an amenity for convention-goers visiting the GRB.”

The amenity being served is convenience and travel peace of mind, according to Mark Goldberg, Houston First’s assistant general counsel.

“We think this will be an attractive option for international travelers coming to Houston,” Goldberg said. “There will be no need to carry large amounts of hard-currency during travel. Pick up your funds when you arrive in Houston. Exchange-rate conversions for those seeking U.S. dollars are done automatically at our bitcoin ATM.”

The list of merchants that accept bitcoin as a payment form is expanding. Among the household names that accept bitcoin are Dell and PayPal. People also have the ability to donate bitcoin to United Way. In addition, Texas Gov.-elect Greg Abbott accepted bitcoin during his campaign this year.