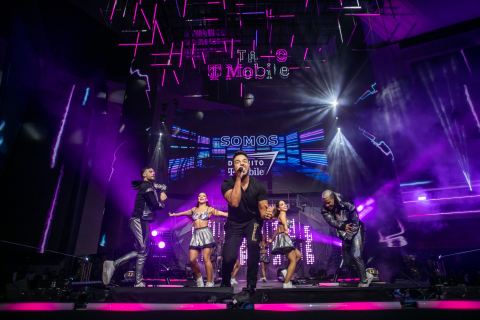 Famous for the fortifications, cobblestone streets and colorful Spanish Colonial buildings of Old San Juan, founded in 1519, Puerto Rico is also becoming a favorite for something brand-new, and it’s as vibrant and infused with local heritage as the historic district. Distrito T-Mobile, a five-acre entertainment complex that was being unveiled in phases right across from the Puerto Rico Convention Center, is now fully open, taking the experience for residents, visitors and event attendees to new heights.

"In celebrating the opening of Distrito T-Mobile, we share with the world our goal of revolutionizing how people enjoy and pursue new experiences in Puerto Rico, while maintaining the authenticity that makes our island special,” said Federico Stubbe Jr., CEO of PRISA Group, the developer and principal investor of Distrito T-Mobile.

The 500,000-square-foot district features a hotel, 12 gastronomic concepts, a music hall, a high-tech central plaza, an urban adventure park, movie theaters and various art installations, all of which give attendees an abundance of options for afternoon and evening diversions as well as options for private events and group dining.

“We've created a stunning, innovative entertainment complex that naturally injects the flavor and essence of local culture, traditions and talent for a global audience," Stubbe said.

Corporate Event News attended the recent grand opening of Distrito T-Mobile, and that innovation, talent and local culture were on full display in Popular Plaza, the heart of the district, which lit up with 14,500 square feet of LED screens and resonated with the rhythms of traditional bomba and pena music and dance, as well as salsa and bachata.

The organizers pulled out all the stops for the last surprise performer—the island’s own mega-star, Luis Fonsi, who belted out two of his hits, Despacito and Echame La Culpa, to a cheering crowd.

The entire event was a testament to the complex’s ability to deliver distinctive, fully curated, locally inspired entertainment experiences and events. Distrito T-Mobile was designed to make Puerto Rico the top world-class entertainment destination in the Caribbean and breathe new life into the convention center district, according to Brad Dean, president and CEO of Discover Puerto Rico.

“It’s going to be a game changer not only for leisure travelers but for meeting and convention planners and organizers of events, and in many ways, it already has been,” Dean said. “If you’re organizing a meeting or a trade show, you have the Puerto Rico Convention Center, the largest, most technologically advanced convention center in the Caribbean, with a strong commitment to sustainability, but outside of that, there wasn’t a lot there other than a few hotels and of course, the proximity to Old San Juan.”

Now, in addition to the historic heart of the city nearby, attendees, exhibitors and organizers can simply walk across the street from the convention center or their hotel for some truly authentic dining and entertainment experiences.

“You have this highly experiential entertainment destination now that offers tremendous gastronomy, as well as great reminders of the history, arts and culture of the island,” Dean added.

Distrito T-Mobile highlights include the following:

Popular Plaza: The high-tech, 50,000-square-foot Popular Plaza accommodates up to 900 people and boasts a center stage with a digitized system comprising more than 14,000 sq. ft. of LED displays. The plaza is the public social center of the complex, but it can also be used for events on a case-by-case basis.

ToroVerde Urban Park: Ziplines, a rock-climbing wall and mazes provide adventurous diversions and unique teambuilding experiences for groups at ToroVerde Urban Park. The park’s two ziplines include Sky Bull, which starts from a 90-foot-tall launch tower and has three cables from 150 to 400 feet long that give participants an aerial tour of Distrito T-Mobile, and Blazing Bull, which sits at a height of 120 feet and has a 900-foot-long cable that zips participants into the convention district and a 600-foot-long cable back to Distrito T-Mobile. The park also features Bull Maze, a ropes course consisting of 40 obstacles, and Pico Del Toro, the largest rock-climbing wall in the Caribbean.

Restaurants: The complex features an eclectic mix of 12 dining options, all of which are unique to the island and none of which are chains. Some are available for private events and group dining. Among the highlights are La Central by Mario Pagán, which features authentic flavors of Puerto Rico and is inspired by the island’s sugar mills, rum distillation towers and aging barrels, as well as the cultivation of cane, coffee and tobacco; Sazón Cocina Criolla, a modern representation of Puerto Rican cuisine; and Barullo Taberna Española, a food hall-style market that pays tribute to the island’s Spanish roots.