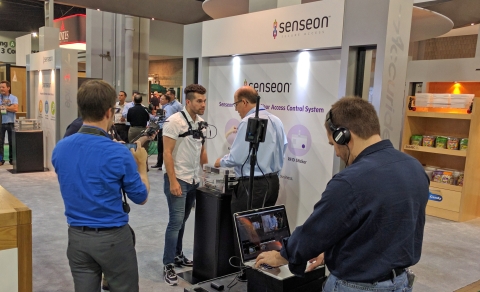 Want to take your trade show and turn it into a compelling, not-to-miss industry event? Try strapping a few live action cameras to some of your attendees, let them loose on the showfloor, live stream their experiences on Facebook and voila – you’ve not only given your at-home audience a glimpse of what they’re missing, you’ve also turned your event into a cutting-edge attendee marketing machine!

One Atlanta-based trade show did exactly that, and with overwhelmingly positive results.

As a biennial trade show and conference for the woodworking, design, and material processing industry, the International Woodworking Fair (IWF Atlanta) isn’t a stranger to harnessing the latest video and social media technology to drive participation and increase engagement before, during and after the event.

For its 2014 show, IWF partnered with CNTV, a media company specializing in conventions, trade shows, exhibitions, events and conferences, to help launch its IWF TV YouTube video campaign, which ended up amassing over 500,000 views and almost two million impressions.

But for IWF 2016, held Aug. 24-27 at the Georgia World Congress Center, IWF Vice President of Sales and Marketing Jim Wulfekuhle wanted to find something new to help build on the success and momentum of IWF TV.

Since the event draws a strong regional and drive-in audience, Wulfekuhle began looking for a new technology platform that would not only capture the excitement of the trade show floor but also lure in last-minute decision makers to the event.

“Around a month out from the show I decided at three in the morning (that we would) put GoPro (cameras) on four buyers and business owners at the trade show,” Wulfekuhle said. “That led to discussions with CNTV, who we were already using for the second time, which led to (the idea of using) Facebook live.”

For those unfamiliar with Facebook Live, this live video streaming service allows users to instantly broadcast live videos from their mobile devices to their Facebook news feeds.

With just weeks to go until IWF 2016, CNTV got busy bringing Wulfekuhle’s idea to fruition.

“CNTV’s team has produced thousands of hours of live broadcasts, so it was a natural fit for us to help IWF TV extend its video marketing presence via Facebook Live,” Greig Powers, COO of CNTV said.

He added, “While we’ve created many live programs for a variety of clients over time, what was different about this project was the idea of visually bringing in a buyer’s point of view while also taking advantage of the built-in audience Facebook ‘likes’ provide.”

Using GoPros strapped to the chests of four buyers, CNTV broadcasted multiple views of the business owners walking the showfloor, visiting booths, engaging in conversations with exhibitors and trying out a range of products and services.

“While many people can create a live Facebook stream from their phone, what’s evident is that professional touches (improve) the viewer experience and reflection on the brand,” Powers said.

·      Audio quality not possible with a cell phone microphone

·      Coaching of on-camera buyers to increase their on-screen effectiveness

·      Possibility of streaming to multiple platforms (such as YouTube)

·      Use of recording for other uses (i.e. playback in hotels, shuttles, convention center monitors)

“The end result, from a show marketing perspective, is that viewers found out what they’re missing if they, too, are not on the trade show floor,” Powers said.

He continued, “We believe this led to some professionals who were within a reasonable distance of Atlanta to attend the show last-minute. It will also generate buzz for the next IWF Atlanta and created content that can be used year-round.”

According to Wulfekeule, IWF will once again partner with CNTV for its 2018 show and has plans to use 360 live cameras to further enhance the event’s robust video and live streaming efforts.

So why should more show organizers consider harnessing the power of social media and live streaming for their events?

“Social channels are such a powerful tool for marketing events, and Facebook places a huge emphasis on live content,” Powers said. “Live streams are prioritized to the top of users’ feeds, and on top of that, creating live broadcasts leverages the ‘likes’ that event organizers work so hard to grow year-round.”

He continued, “Previously, the most common way to live stream required a new audience each time to arrive at a certain time and web page. With Facebook, the audience is already established and we can deliver the live content directly to an app that tens of millions of users already have. Live content also adds spontaneity and authenticity to event marketing, which younger audiences crave.”

Harnessing the Power of Loyal Event Attendees
Loyalty. It’s coveted in many industries and events are no exception. Loyal attendees are one of a trade show’s most important assets. Show organizers can use their…
Harness the Power of Influencer Marketing with snöball
Merriam-Webster defines the snowball effect as a situation in which one action or event causes many other similar actions or events. And that is exactly what event tech…
How to Harness the Power of Social Media for Your Event
If you want to have a successful event, you must include a social media campaign. Start with a focused strategy that targets who you want to come to your event, who is…
Harnessing the Power of Event Data for Trade Show Growth
Nineteenth-century U.S. merchant and marketing pioneer John Wanamaker observed: “Half the money I spend on advertising is wasted. The trouble is, I don’t know which half.” …
How to Harness the Power of Search Engine Optimization (SEO) for Events
I write many articles on social media, content marketing and how to engage with your customers, which are all great strategies for shows, exhibitors, and attendees to educate…
The Power of Relationships (Plus, Get to Know the TSNN Team!)
As the proud marketing director of TSNN and the celebrated TSNN Awards, I know real connections are the lifeline of our industry. But how acquainted are we, really? …