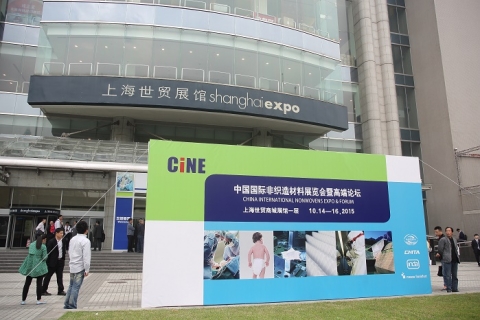 The China International Nonwovens Expo & Forum (CINE, supported by Techtextil), returns for its second edition in 2017, with an earlier date in the calendar – June 21-23 - to better suit the industry’s needs.

Co-organised by the Sub-Council of Textile Industry, CCPIT; the China Nonwovens & Industrial Textiles Association (CNITA); the Association of the Nonwoven Fabrics Industry (INDA); and Messe Frankfurt (HK) Ltd this biennial event was first held in October 2015, and has been brought forward to June due to suggestions from key stakeholders.

Wendy Wen, senior general manager of Messe Frankfurt (HK) Ltd, said: “The positive feedback from participants in 2015 about the event, and the opportunities it presented the industry, very much exceeded our expectations given this was the first time we had organised CINE.”

She added, “A number of our partners did mention to us, however, that the industry calendar was somewhat congested towards the end of the year, and that an event dedicated to nonwovens such as CINE would be better held earlier in the year. After a consultation process with a range of participants, we decided to move CINE 2017 to June.”

CINE’s equal focus on both its expo and forum ensures its relevance extends throughout the textile industry and beyond.

The expo last year featured over 80 exhibitors, with nonwovens products for the medical, filtration, building and other industries on display.

The forum, which included two days of seminars and product presentations from overseas and Chinese companies, allowed producers, end-users, academics, industry associations and other stakeholders to have in-depth exchanges on the current market trends, national industry standards and policies, and new product developments, as well as seek out new business opportunities in the Chinese market.

Together, the expo and forum attracted nearly 5,000 visitors from 29 countries and regions across three days.

China is the world's largest producer, exporter and consumer market for nonwoven fabrics, and over the past decade, growth in these three areas has been rapid.

From 2011-15, nonwovens output grew at an average annual growth rate of 11.7 percent, to 4.85 million tons, with the country now occupying 40 percent of global output according to the China Nonwovens & Industrial Textiles Association (CNITA). During this same period, sales of nonwovens in China grew 21.6 percent, while exports increased by 13.9 percent.

Going forward, from 2016-20 Asia is expected to occupy 47.1 percent of global market consumption share. Within Asia, China, India and Japan will account for 77 percent of nonwovens consumption, with China alone predicted to comprise around 57 percent of this consumption.

Much of this consumption growth is expected to come from the implementation of China’s recent 13th Five-Year Plan and impressive One-Belt One-Road initiative, which will give a boost to the utilisation of nonwovens in the country and wider region for environmental protection, healthcare and elderly care, first aid and public safety, and military-civilian integration in particular.

Furthermore, over the past five years the Chinese government has made concerted efforts to reduce industrial pollution in the country, leading to a surge in demand for filtration nonwovens.

Not only are new filters being installed in newly built and existing plants, but these standards require them to be replaced more frequently.

The domestic high-temperature filter materials industry has experienced an average growth rate of 16 percent per annum over the last five years, while bag filter sales are expected to rise 32 percent between 2016 and 2020.