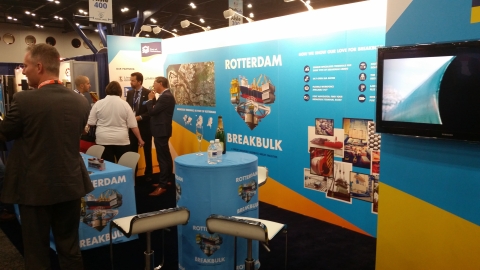 Just more than a month ago, 5,000 attendees and 300 exhibitors gathered at Houston’s George R. Brown Convention Center to take part in the 25th anniversary of Breakbulk Americas 2014, which serves the breakbulk cargo logistics industry.

Burkhalter, a heavy-lifting company that has exhibited at the show for several years, had a 20’x20’ booth on one of the main aisles.

“The U.S. is our key market,” said a booth representative. “Our customers are here. It’s a very well attended show. There’s also a lot of networking.”

Besides shipping companies and suppliers who supported them, there also were ports from all over the world scattered throughout the showfloor.

One of the biggest shipping ports in Europe, which is in Antwerp, Belgium, also is the site of one of Breakbulk’s other shows.

“Antwerp handles 15 million tons a year,” said a booth representative for the Port of Antwerp. “We have been exhibiting at this show since 2003.”

She added that the Breakbulk show in Antwerp was the fastest-grwoing one, with an increase of 1,000 attendees this year to more than 6,000.

Jeremy Luski, vice president, Event Operations & Registration Services for Breakbulk Events and Media, said the Breakbulk business has been booming, which has led the company to grow from just two shows to six in the past four years alone.

“This year’s show is fantastic,” he added. “The showfloor is hustling and bustling.”

Luski said he and the team work hard to keep the show relevant by doing things such as placing all education sessions on the showfloor. “We’re had great feedback that people don’t have to leave the showflloor,” he added.

They also launched Breakbulk TV, where interviews were held throughout the show, as well as podcasts were recorded onsite and there was a robust app for the event, which Luski said was a “fantastic technology to have.”

Next year’s Breakbulk Americas show will be held Oct. 5-8 back at the George R. Brown, but the following year the show is heading to Fort Lauderdale, Fla.