Bevy of Convention Centers Across U.S. Expand and Renovate 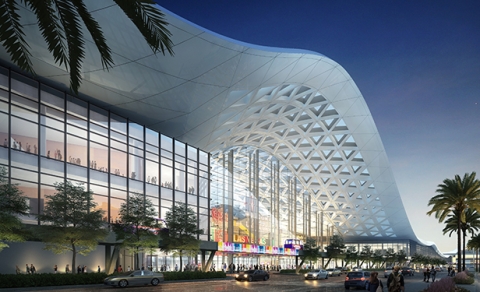 As the exhibitions industry continues to surge full speed ahead, more and more destinations are recognizing the need to upgrade, revamp and expand their convention centers in order to compete for major trade shows and events.

These days, myriad facilities are celebrating ground breakings, undergoing new construction projects or anticipating grand openings, while others have put their plans on hold.

Located on the famous Las Vegas Strip, the new facility will sit adjacent to the LINQ Promenade retail district and will be connected by skybridge to Harrah’s Las Vegas and The LINQ Hotel and Casino, and by pedestrian bridge to the Flamingo Las Vegas.

Expected to open in 2020, the venue has already contracted $70 million in business, according to Michael Massari, chief sales officer for Caesars Entertainment, with more in the pipeline.

Beginning next spring, the Charlotte Convention Center in North Carolina will undergo a $110 million expansion that will add approximately 50,000 sq. ft. of meeting rooms and pre-function space, allowing up to 54 individual breakout sessions at one time that can accommodate 50-600 people theater-style as well as the flexibility to create a 10,000 sq. ft. space. Slated for completion in spring 2021, the project includes a revamping of the Richardson Ballroom that will allow it to be configured into four meeting rooms (up from three) at 7,700 sq. ft. each.

The expansion will also add an over-street pedestrian walkway to The Westin Charlotte, two new hotels that are part of the Crescent Communities mixed-use development, as well as the LYNX Blue Line light rail Stonewall Station, which provides access to abundant dining, retail and nightlife. Opened in 1995, the 550,000-square-foot Charlotte Convention Center currently features a 280,000 sq. ft. exhibit hall and 126,500 sq. ft. of meeting and ballroom space, including the 35,000 sq. ft. Richardson Ballroom and the 40,000 sq. ft. Crown Ballroom.

In late July, the Georgia World Congress Center in Atlanta broke ground on a $55 million expansion project, the venue’s first major expansion since 2002. Expected to be completed by the end of 2019, it features a new 100,000 sq. ft. exhibit hall that will join the facility’s B and C Buildings and create more than 1 million sq. ft. of contiguous exhibition space.

The Jacob K. Javits Convention Center in New York City is making progress on its $1.5 billion expansion project, which it began in March 2017. Slated to add approximately 1 million sq. ft. by 2021, the project includes a 500,000 sq. ft. exhibition hall; a 55,000 sq. ft. ballroom that will be the largest of its kind in the New York region; 45,000 sq. ft. of meeting room space and a rooftop terrace overlooking the Hudson River. Known as the busiest convention center in the U.S., the six-block, LEED-certified facility currently offers 102 meeting rooms and 840,000 sq. ft. of exhibition space, not to mention a 6.75-acre green roof.

Las Vegas Convention and Visitors Authority is investing the $860 million into Phase Two of the Las Vegas Convention Center District expansion project that will add 1.4 million sq. ft. to the existing facility, including 600,000 sq. ft. of new exhibit space that is expected to be open in time for CES in 2021. The existing 3.2 million-square-foot structure will also undergo a complete renovation in phases that is slated to be completed in 2023.

Nearly six years after it was originally proposed, the long-awaited $241 million reinvention and expansion of Kentucky’s Lexington Convention Center is underway. Upon completion in Nov. 2021, the expanded facility will offer more than 100,000 sq. ft. of expo halls; a 25,000 sq. ft. ballroom and more than 30,000 sq. ft. of flexible meeting space.

In May, Anschutz Entertainment Group (AEG) proposed a $1.2 billion expansion of the Los Angeles Convention Center and JW Marriott Los Angeles L.A. Live that includes a $500 million, 350,000 sq. ft. addition to the convention facility that would increase its space to more than 1.2 million sq. ft.

The proposal also calls for a $700-million addition to the JW Marriott Los Angeles in the form of a 40-story hotel tower with 850 rooms and a 51,000 sq. ft. ballroom that would be connected by pedestrian bridges to the existing hotel and the LACC’s West Hall.

If approved, Los Angeles Mayor Eric Garcetti said he would like the projects to be completed by 2022 at the latest. The LEED Gold-certified LACC was last expanded in 1997 and currently boasts 867,000 sq. ft. of meeting and exhibition space.

Final touches are being put on the three-and-a-half-year, $620 million expansion and renovation of the Miami Beach Convention Center that will grow the South Florida venue to 1.4 million sq. ft. Expected to be completed in Sept., the reimagined, LEED-certified facility will include almost 500,000 sq. ft. of renovated expo space; a 60,000 sq. ft. grand ballroom; additional meeting rooms; a 20,000 square-foot glass rooftop junior ballroom, state-of-the-art technology and new versatile indoor and outdoor public spaces.

On March 12, San Francisco’s Moscone Center celebrated the topping out of its $551 million, three-year expansion project that appears on-schedule for a Jan. 3 grand opening. The project will increase the size of the facility by 21 percent, with a 50,000 sq. ft. grand ballroom, more than 80 meeting rooms and more than 500,000 sq. ft. of contiguous expo space and outdoor terraces.

Already a leader in sustainability, the facility plans to achieve LEED Platinum certification and become the most environmentally sustainable convention center in North America, a zero-emissions building that will boast an onsite water treatment center and the largest solar array on any building in the Golden Gate City.

The Reno-Sparks Convention and Visitors Authority are exploring a potential expansion of the Reno-Sparks Convention Center, which underwent a $100 million expansion almost 17 years ago. Currently at 381,000 sq. ft., the Northern Nevada facility needs a minimum of 600,000 sq. ft. of contiguous event space if it hopes to remain competitive in attracting and retaining major shows, according to a joint feasibility study paid for by the RSCVA. Refreshing and expanding the RSCC could cost between $164-$273 million, funds that would likely be raised through hotel room taxes.

Starting in January of next year, the Sacramento Convention Center will be getting a major makeover. The approximately $240 million expansion and renovation project will offer more than 240,000 sq. ft. of event space, including 160,000 sq. ft. of expo space, 37 breakouts and 79,100 sq. ft. of meeting space. Construction is slated to be completed in late 2020, with construction on the interior of a new 40,000 sq. ft. ballroom to continue and be completed by April 2021.

The San Diego Convention Center’s dreams of doubling its size to almost 2.6 million sq. ft. were put on hold this month when a citizen’s initiative to expand the center failed to meet the deadline for the November 2018 general election and the city council rejected a last-minute proposal for a city-sponsored measure.

The LEED Gold-certified waterfront property is best-known as the host of Comic-Con International each July, a major event that continues to grow its space needs each year. The SDCC completed a $216 million expansion in Sept. 2001 that almost doubled the building’s size to 2.6 million sq. ft.

Seattle’s Washington State Convention Center is investing$1.6 billion in a new multi-level convention building that will add approximately 250,000 sq. ft. of exhibition space, 125,000 sq. ft. of meeting rooms and 60,000 sq. ft. of ballroom space to the facility’s current capacity of 236,700 sq. ft. Expected to open in 2022, the recently dubbed “Summit” building will be LEED Gold-certified and will feature pedestrian walkways that will connect it to the existing “Arch” building. When completed, the Summit building is expected to attract more than 400,000 new conventioneers to the city and generate more than $19 million in annual tax revenue.