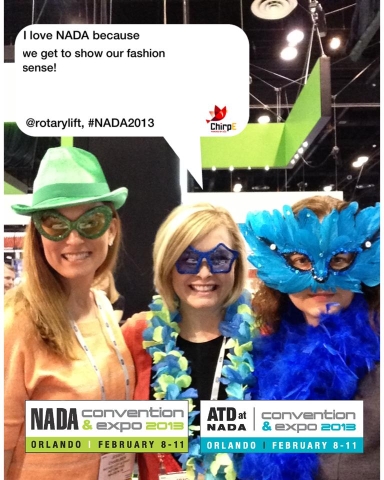 At the National Automobile Dealers Association Convention & Expo, held Feb. 8-11 in Orlando, attendees had the opportunity to try out something new - a2z, Inc.'s ChirpE Photo Booth.

At the booth during the show,  not only did people have fun dressing up and sharing photos through social media, it also created a lot of buzz during and after the show.

The ChirpE Photo Booth enables event attendees to take their own picture, add a quote or testimonial and post it to their Facebook Page photo album and Twitter media gallery – all in a matter of a few seconds.

NADA wasn't the only show the ChirpE Photo Booth was a hit.

In December, at the International Association of Exhibitions and Events's Expo! Expo! a2z debuted the ChirpE Photo Booth to positive reviews.

Expo! Expo! attendees used the phrase “I Love a2z because” and posted their photos taken with fun props.

Every attendee who participated and took their photo received a $10 gift card instantaneously.

The onsite benefits of the ChirpE Photo Booth were it created a fun and exciting environment on the showfloor, keeping attendees engaged and happy, and happy attendees provide more business to exhibitors.

About 125 people used the photo booth in a2z’s booth during the five hours of the tradeshow.

However, the outreach results from this were “astounding,” according to Rajiv Jain, president and CEO of a2z.

Here are some results during the week of the show:

4 Ways to Create a Memorable Trade Show Booth
Standing out at trade shows when there are dozens of trade show booths trying to grab the attendee’s attention is easier said than done. The most memorable exhibits are those…
How to Create a Big Bang With a Small Booth
When it comes to trade show booths, size isn’t everything. Though a large and intricate booth space can be enticing, small booths can still make a big impact. With a little…
3 Unique Trade Show Booth ideas that increase Attendee Engagement & Buzz
Unique trade show ideas and promotional concepts can help make your booth exhibit an amazing experience and sought after destination for attendees at your special event,…
Five Great Reasons to Visit a2z’s Booth #707 at Expo! Expo! 2017
Expo! Expo! 2017 is days away, and we are all geared up to share with you how “The Journey is Sweeter with a2z”. While we can’t divulge all the juicy details just yet, here…
How to Create a Brand Presence Off of the Trade Show Floor
Successful brands must differentiate themselves to stand out to their target audience and from their competitors. For many, trade show marketing is a major component of the…
Want to Have a Successful Booth? Create a Memorable Attendee Experience!
Walking the packed showfloor for the American Society of Association Executives’ Annual Meeting, held this week at Detroit’s Cobo Center, it was abundantly clear that the…