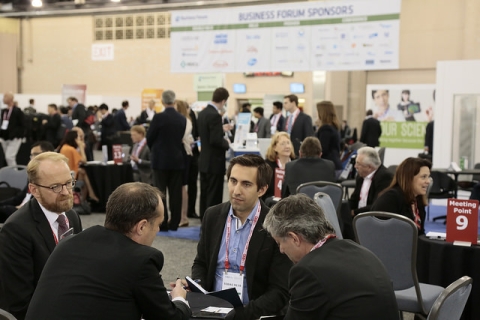 The 2015 BIO International Convention, for global biotech community, recently was held at the Pennsylvania Convention Center in Philadelphia and hosted 29,279 partnering meetings, a new record for the event.

“This year’s BIO International Convention was a tremendous success, bringing to Philadelphia leaders in industry, government and academia from across the globe to pursue biotechnology’s potential to solve some of society’s most pressing problems,” said BIO President and CEO Jim Greenwood.

He added, “From our outstanding keynote speakers, to the record number of partnering meetings, the 2015 Convention was a resounding success.  This event continues to provide biotech leaders with the opportunity to showcase the best of our industry and form connections and partnerships that will drive growth in the sector for years to come.”

Educational programming included more than 750 speakers and 125 sessions in 16 educational tracks which addressed the latest business opportunities, breakthroughs in medicine, diagnostics, the environment, energy production, food and agriculture and more.

The BIO Exhibition featured more than 1,800 exhibitors and covered 150,000-plus square fee,t with 47 state, regional and international pavilions. The Innovation Zone, featuring SBIR grantees from the National Institutes of Health (NIH) and the National Science Foundation (NSF), as well as the Digital Health Zone, both doubled in size this year.

“With the support of the BioNJ, the Delaware BioScience Association and Pennsylvania Bio, our tri-state region was able to make this year's BIO 2015 convention in Philadelphia a tremendous success,” said Jack Ferguson, Philadelphia Convention & Visitors Bureau President & CEO. “We were grateful for the opportunity to showcase our wonderful Pennsylvania Convention Center, the hotels and hospitality offerings of our city and our region's life sciences assets, and we hope BIO comes back again in the near future.”

He added, “The 2015 BIO International Convention may be wrapping-up, but I know the entire biotech community is excited to be back in San Francisco in 2016, where we expect another great BIO Convention.”

2016 BIO International Convention Sets New Record for Partnering Meetings
The 2016 BIO International Convention, the global event for biotechnology, concluded today at Moscone Center in San Francisco, with his year’s convention hosting 35,700…
Next Generation of BIO One-on-One Partnering Unveiled for 2015 BIO International Convention
The Biotechnology Industry Organization (BIO) officials said that One-on-One Partnering™, BIO’s proprietary software system, was unveiled for the 2015 BIO International…
InfoComm Sets New Records for Size and Attendance in Las Vegas
The Audiovisual and Integrated Experience Association lowered the curtain on its first InfoComm show in North America as AVIXA, while the annual trade show and conference for…
ASAE Sets New Registration Record with Virtual Annual Meeting & Exposition
The results are in: Registration reached an all-time high for the 2020 ASAE Virtual Annual Meeting & Exposition, with the most registrants ever in the organization’s 100-…
IMEX America 2019 Sets New Appointment Record
If you were flying home from Las Vegas last week, there’s a good chance you were seated next to a fellow IMEX attendee. This year’s IMEX America, held at Sands Expo and…
San Diego Convention Center Sets Environmental Record
In 2014, San Diego Convention Center diverted 60 percent of all event waste, approximately 1,120 tons, from local landfills, setting a new record. The effort is part of the…