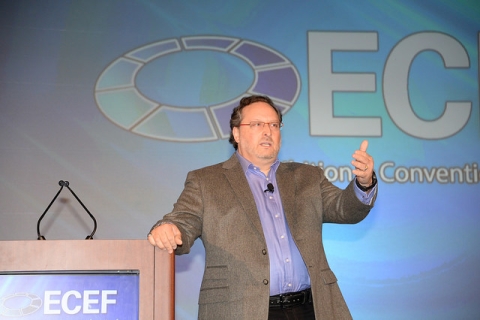 The 2015 Exhibition & Convention Executives Forum, held May 27 in Washington, D.C., drew more than 200 trade show organizers and suppliers to a packed room at the J.W. Marriott to take part in a day filled with engaging sessions.

“This year has been a great year,” he added.

The full day kicked off bright and early with a keynote by Scott Schenker, general manager, Events and Production Studio, Microsoft Marketing, and founder of Janus Dialogs.

Schenker said there are several trends to watch out for that could impact the events industry, such as digitization, the shared economy, robotics and even the water shortage. “Will water at events cost more?” he asked.

Schenker also floated some more provocative trend possibilities, like with the legalization of marijuana, could we be seeing ‘marijuana bars’ at shows in the future?

One thing he doesn’t see changing, though, is people getting together face to face. “I’ve found events to be incredibly resilient,” Schenker added.

The panel discussed how CONEXPO-CON/AGG, NPE 2015 and Toy Fair created exhibit and special interest areas through collaboration with other organizations.

Brossard talked about her show’s collaboration with UBM/Advanstar’s Licensing Expo, where there was a natural synergy.

“If there is an event where there exhibitors are your exhibitors (and vice versa), that’s a match made in heaven,” she said.

Tanel said they often work with the other major manufacturing shows overseas to make sure they aren’t scheduling conflicting events, and Sanders said at NPE 2015 they created a waste-free zone area at the back of the exhibit hall to draw people there that was such a success it has spawned its own event next year.

In the next session, Lori Anderson, president and CEO, International Sign Association, spoke about custom research they did with FreemanXP in which they created more than a dozen different attendee and exhibitor personas to discover who was coming to and exhibiting at their show and how to create the right experience for them.

As a result of the feedback from the research, several changes were made to the show. “We got rid of the old way of doing seminars and cut them in half,” Anderson said. “We invested in higher quality speakers to attract attendees.”

In addition, they developed a new program to attract young professionals and created new networking events.

The results? At the 2015 show, there was growth in attendance and on the showfloor, and 98 percent of the attendees said they would recommend the show.

When the audience was polled, 55 percent of the people in the room said they did not have a sustainability policy for their shows.

Kate Hurst pointed out that for the Greenbuild Conference & Expo, which is owned by Informa Exhibitions, but has a partnership with the Green Build Council, exhibitors have to comply with a set of green standards to be on the showfloor.

Peterson said that in order to even get started with a sustainable policy at a company, “you need the higher ups buying in.”

Some of those findings from the attendee acquisition side included effective storytelling, integrated marketing communications, community and one-to-one marketing.

Just one of the key takeaways from the Attendee Acquisition Roundtables was to create an ‘attendee salesperson’ position.

On the exhibitor side, some of the feedback was they needed more sales training and feedback on customers and key takeaways included displaying photos of the sales team on the show’s web site so they knew who to look for and ask prospects how they want to be contacted.

The final session of the day was a keynote led by Kerry Bodine, co-author of “Outside In”, who said she was all about creating a great customer experience.

So, how can that happen at events? Bodine said she has worked with several companies to find out what the steps were of their customer’s journey (or attendee’s) be actually creating a map of what the first to last touch points were with them.

“By looking at a journey map you can see what the experience is from the customer’s viewpoint and see where the pain points are,” Bodine said.

She encouraged the audience to “keep promises and then make them” with their own customers.

After the event, Lippman said, “In this business, you have to earn it every time. I think (the event) went really well and I’ve received a lot of positive feedback so far.”

Next year’s ECEF will be held June 1 at the JW Marriott in D.C.