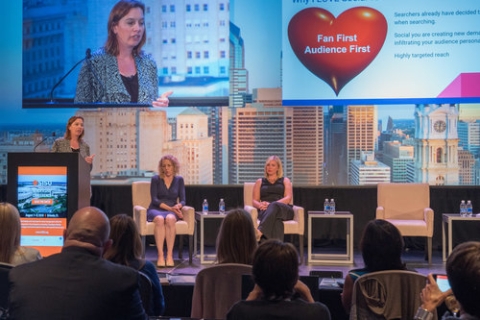 When nearly 200 for-profit trade show executives and suppliers to the industry gathered Aug. 1-3 in Philadelphia, they were treated to a few days filled with not only with top-notch education sessions about everything from when or when not to launch and the latest event tech out there, but also valuable networking opportunities with their peers.

“This year’s program had a strong marketing focus to it, and we saw more marketing director types than usual. But the majority of the attendees continue to be from our core focus, vice presidents and show directors,” said SISO Executive Director David Audrain.

He added, “We heard lots of comments from attendees that the content was good and they were picking up good ideas from the program and from the networking with other attendees. As with any event, we want to make sure that attendees find value in their time invested, and if they are happy, then so are we!”

Here are some key takeaways from the SISO Leadership Conference:

Element of Surprise – Don’t underestimate your attendee’s desire to be surprised at your event, said Dinner en Blanc’s Co-founder Sandy Safi. Dinner en Blanc has more than 80 events annually in cities around the U.S. in which people gather with everything they need to have a dining experience with up to several thousand people in a ‘surprise’ location. David Adler, CEO of Bizbash, said, “Design an event with emotional elements.”

Launching an Event – “I learned … by failing,” said Mike Carlucci, senior VP of Clarion UX. He added that he made the mistake of going after booth sales first and not taking into account what the community really wanted. Martha Donato, founder and president of Mad Event Management, has launched well more than 20 events – several of which still are running and, said to always do the research. “It’s also good to find a partner,” she added. Greg Topalian who runs Leftfield Media, said, “If you are going to do this, you can’t be afraid to make mistakes.”

Want More Attendees? – Liz Irving from Halloween & Party Expo, said that it was important to “elevate the quality of the buyers attending.” The stakes are high – globally, the average value of a lost customer is $243 and sometimes costs are 7x more to acquire new ones. Cassandra Farrington, co-founder of Marijuana Business Journal Daily, said that creating meaningful attendee personas and marketing to them effectively is key.

And the Winner Is … - Five tech companies vied for the top prize at the SISO Event Innovation Battlefield, and the one the audience voted as the winner was EventBots by Sciensio. EventBots is a technology that allows attendees at an event to text any question they have about it to the EventBot tool and receive an immediate answer.

Sales, Sales, Sales – “At the end of the day, we are just trying to put a buyer and a seller together,” said Craft Beverage Expo’s Founder/Director Kellie Shevlin. Another golden nugget of advice she added, “Just because someone wants to give you money, doesn’t mean they should.” Laurie Powell, vice president of Business Development eventPower, said in order to truly serve the show and the exhibitor, the exhibitor should be requalified before just selling them a booth. “Don’t take things for granted,” she added.

Ensure a Safe Show –Leftfield Media’s Greg Topalian talked about steps taken during one of his previous shows at the Walter E. Washington Convention Center to ensure a safe as possible event. Steps taken included: Having only one public access point, bag check, K-9’s, police presence and a weapons check. Total cost was $43,000, but well worth it, he added.