After a temporary setback in the third quarter of 2017, the growth of the exhibition industry resumed during the fourth quarter, according to Fourth Quarter Index Results conducted by the Center for Exhibition Industry Research (CEIR).

The performance of the industry, as measured by the CEIR Total Index, posted a strong year-on-year gain of 3.1 percent (see below). 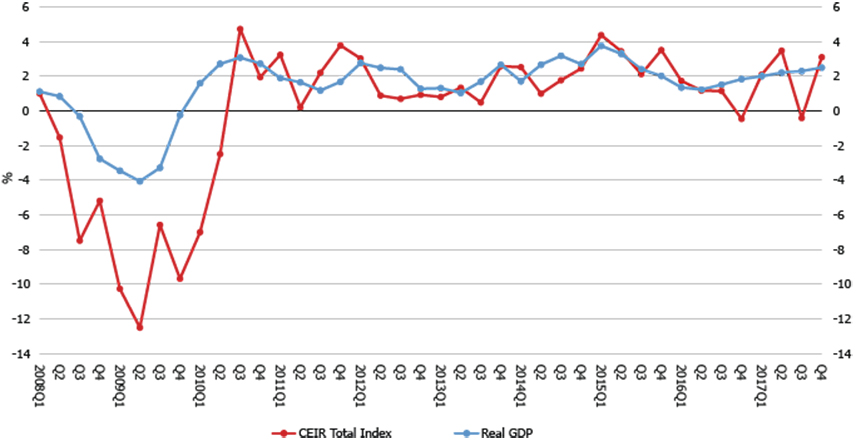 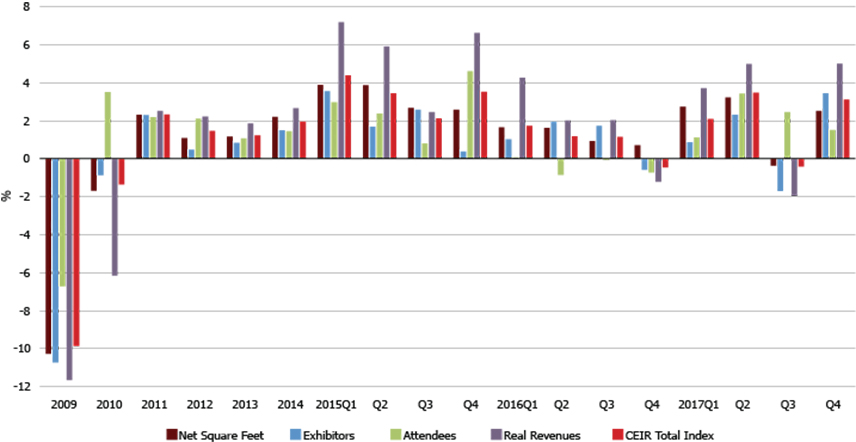 “When looking at the quarterly results for real revenue, one has to keep in mind perspective,” said Cathy Breden, CEO of CEIR.

She continued, “During the Great Recession, real revenue suffered the biggest decline among four metrics. The big fall naturally leads to a big rebound. As such, real revenue has experienced the largest recovery during the past seven years. Nonetheless, real revenue in 2017 – $10.29 billion – was still 3 percent below the peak in 2007. In addition, revenue per NSF in 2017 was still below the 2007 level.”

The seven-page report covers the following:

• Range of engagement opportunities to consider using in an exhibit booth

• Three case studies and other examples

“The heart of a trade show is the engagement that takes place between exhibitors and attendees on a show floor,” Breden said. “It is an important, unique value of the channel.”

She continued, “Marlys’ report does a great job pulling out key trends from CEIR’s Attendee Engagement Study Series and offering examples of how exhibitors have successfully responded to them in a way that helps them achieve their overall goals for exhibiting.”

CEIR Releases Fourth Report in Attendee Retention Insights Series
The Center for Exhibition Industry Research has released the fourth report in its newest series, 2016 Attendee Retention Insights Part Four: Special Activities and…
CEIR Releases Fourth Report in How to Grow Attendance Series
The Center for Exhibition Industry Research (CEIR) has released the fourth and final report in its new “How to Grow Attendance” series for event attendee marketers. By…
CEIR Index Report: Trade Show Industry Posts 18th Consecutive Quarter of Growth
For the 18th quarter in a row, the trade show industry saw an overall uptick in growth in the fourth quarter of last year of 1.7 percent, compared with the same quarter in…
CEIR Releases New Industry Insight Series Report on Gamification, Seventh Report in Attendee Floor Engagement Study Series
The Center for Exhibition Industry Research (CEIR) has released two new industry reports designed to help exhibitors use gamification successfully as well as help show…
CEIR’s New Industry Insights Report Helps Demystify Exhibitor Electrical Services
Exhibitors trying to minimize their trade show exhibiting expenses might want to get their hands on “Demystifying Electrical Services for the Exhibitor,” the newest Industry…
CEIR Q1 Index Results Show U.S. B2B Exhibitions Industry on the Rebound
An expected rebound of the U.S. B2B exhibitions industry is underway, according to the Center for Exhibition Industry Research (CEIR), which released the results of its 2022…