5 Amazing Things to Do in San Francisco 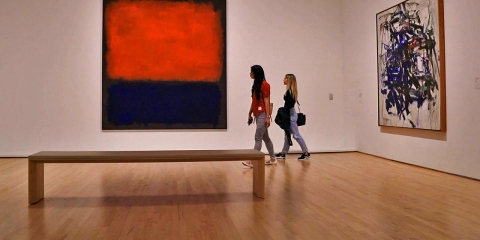 A lifetime in San Francisco wouldn’t be enough to see the city’s countless wonders. That’s why we’ve selected experiences that everyone from the first-time traveler to the frequent visitor will love. Here’s where to shop, eat, stay, and explore in the Golden City.

Stay at The Fairmont San Francisco

Named for the railroad barons (“Nobs”) who built their mansions in the area, Nob Hill is one of the most high-end neighborhoods in San Francisco. At its pinnacle sits the historic Fairmont San Francisco, a stunning expression of early 20th-century opulence. Channel your inner blueblood and relax among marble columns, crystal chandeliers, and giant gilded mirrors. The penthouse suite, which takes up the entire eighth floor, boasts a two-story circular library, a vaulted billiards room, and even a secret staircase that once facilitated dalliances between President John F. Kennedy and Marilyn Monroe.

It’s easy to get lost in the SFMOMA in a wonderful sort of way. The largest modern art museum in the world houses more than 33,000 pieces by the likes of Jackson Pollock, Paul Klee, and Andy Warhol. The space itself is impressive—most notably, in the way the rippling white fiberglass exterior invokes rolling fog—but every inch of the structure is in a sense an exhibition.

Shop in the Mission District

The Mission District is worth a visit if only to see this artsy neighborhood’s vibrant outdoor murals. Once you’re there, stop inside any of the dozens of independent boutiques and eateries. Fuel up with a banana cream cupcake from Wholesome Bakery before browsing for creative gifts at the women-owned design collective Gravel & Gold.

Beaux arts–inspired grandeur, locally sourced food, creative merchants, and killer views of San Francisco Bay—the Ferry Building is like a microcosm of the city itself. Stroll through the Great Nave to explore outposts of some of the Bay Area’s most interesting vendors. Be sure to sample some Mt. Tam cheese from Cowgirl Creamery, try a few bluepoints on the half shell at San Francisco Fish Company, recharge with a siphon pour from Blue Bottle Coffee, and shop for handcrafted tableware at Heath Ceramics.

Eat at The Slanted Door

A meal at The Slanted Door is really all about the windows. Floor-to-ceiling walls of glass showcase sweeping views of the bay. Chef Charles Phan’s take on contemporary Vietnamese cuisine has made this restaurant one of the city’s most popular for more than two decades. Try favorites like shaking beef, cellophane noodles, and imperial rolls. (Ed. note: This restaurant is closed until further notice.)

5 Amazing Things to Do in Venice Beach
Sponsored Exclusively by Visit California This unique Los Angeles County beach town has sand, surf, and a lot of local color. No doubt, many consider Venice Beach to be the…
5 Amazing Things to Do at the Golden Gate Bridge
Sponsored Exclusively by Visit California With its gently curved cables and deep orange hue, the Golden Gate Bridge is a total showstopper. Yes, it’s beautiful to behold,…
PCMA Convening Leaders 2020: Spotlight on San Francisco
PCMA Convening Leaders, the annual PCMA conference for event planners, is coming to San Francisco on Jan. 5-8, 2020. Not only does this mark a 20-year anniversary for the…
Game Developers Conference Draws Record-breaking 28,000 Attendees to San Francisco
In its 26thyear, UBM Tech’s Game Developers Conference just keeps getting bigger and better than ever, with a record-breaking 28,000 attendees checking out the packed…
PCMA Chooses Pittsburgh and San Francisco as Future Hosts of Convening Leaders
The Professional Convention Management Association (PCMA) has chosen Pittsburgh and San Francisco to host its 2019 and 2020 Convening Leaders, respectively. The event is the…
San Francisco Moscone Center Expansion Complete for New Year Opening Celebration
After its on-schedule completion at the end of 2018, the long-awaited Moscone Center expansion project was celebrated with a grand opening gala event on Jan. 3.  The $551…