Don’t Underestimate the Power of the Right Emcee 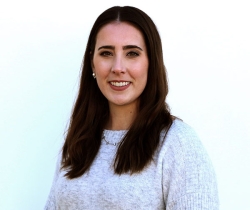 Madeline David is a former TV news reporter and anchor, now working as a virtual events emcee and Communications Strategist at Centrifuge Media, Inc., in Raleigh, North Carolina. After seven years as a journalist covering stories across Texas, the Southwest and Coastal Virginia, she made the switch to the events industry and hasn’t looked back!

The highly anticipated shift back to in-person events is slowly getting underway as meetings and events planners around the globe rejoice. Virtual remains the overarching preference today, but many companies are looking toward later this year and beyond to attempt hybrid, if not fully live events.

Put the enthusiasm under the microscope, though, and it’s no surprise that most planners have a thick layer of caution and concern when it comes to navigating what will certainly be a non-traditional live events environment — at least for a while.

There’s a particular tool planners should strongly consider utilizing to make the transition back as seamless and engaging as possible: an emcee. I don’t mean not just any emcee or host. You need the right one.

The hybrid stepping stone back to live provokes yet another pandemic challenge for the industry: How do we bridge the experience between the remote attendees and those coming together in the same space?

We at Centrifuge Media found ourselves asking a similar question at the kickoff of virtual events. “How do we bring the fanfare and excitement of a live event into an attendee’s home office?”

Out the gate, fighting “Zoom fatigue” in virtual business events was a tall task that resulted in a saturated market of tricks, tools and tips. There is everything from polling and Q&A apps to at-home cooking kits, cocktail hour, 3D virtual sets and midday yoga breaks. New and exciting virtual event technology is still rolling out by the day.

The virtual event emcee was among the many tactics deployed by planners and producers worldwide. Some have reported tremendous success, while others have had so-so experiences with emcees, hosts or moderators.

It largely depends on the person you bring in.

Centrifuge has strayed from the traditional ballroom stage emcees or hosts, who often double as motivational speakers. Instead, the company focuses on an interesting niche: former television news journalists. The logic is clear as we think of the vastly different requirements of a host for pre-2020 live events versus pandemic-era virtual events.

A good event emcee must fully assume the burden of transitioning between speakers and content, deliver an engagement factor, drive brand messaging, provide housekeeping and stay on-time, among other things.

Pivoting this role to the virtual world, and those responsibilities expand because we’re potentially dealing with issues that are out of the hands of on-site event crew members: the muted speaker, the presenter who loses Internet connection mid-slide, etc.

Experienced television news reporters and anchors have the training to handle what’s not in their control, and then elevate the event with their journalistic and on-camera background.

Pulling directly from their time live in the studio or out in the field, they’re quick thinkers, swiftly handling tech or content problems on the fly by ad-libbing through it with ease. They’re also comfortable and familiar with talking to a camera, teleprompter or not, so it feels genuine and brings the audience in. They’re trained to read a script as if they’re not reading a script.

Another benefit: TV journalists are interviewers by trade and can moderate panel discussions or one-on-one conversations in a way that doesn’t feel so “corporate-canned.” This includes recognizing when to reiterate key points and/or dive deeper into a discussion that needs clarity or is just plain interesting.

A bonus: journalists are naturally obsessed with “getting it right.” They’re fact finders and storytelling perfectionists, meaning they’re going to triple check name pronunciations, titles, scripts and any other information they need.

Is this advice too-little-too-late after a year of virtual events and a vaccine rollout underway? No way. It’s never too late to get an emcee involved in your virtual events.

Plus, as we look toward hybrid events, it’s important to shift the role of the emcee. They will continue to not only evoke engagement with the remote audience but also suppress the feeling of disconnect that will undoubtedly come with having the two distinct groups.

The right emcee will talk to both audiences, treating each equally. The right emcee, like a TV journalist, will make the transition back to in-person events pleasant and balanced — so much so that you may want to utilize them post-pandemic, too.