Positive People News, Despite It All: Hires at NEXT Events, Centerplate, JCK and More 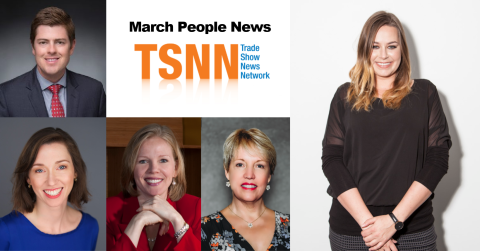 At a time when many companies are grappling with severe layoffs and figuring out how to keep things afloat until the COVID-19 crisis ends, it’s tough to talk about new hires. However, with the goal of spreading more positive news during this challenging time, here are the latest companies with people news to share. Congratulations to everyone on this list!

Walt Disney World Swan and Dolphin Resort in Lake Buena Vista, Florida (which was closed through March 31 at press time), has announced Kathleen Bernesby as director of sales for the entire complex. Together with the sales team and director of sales and marketing, she’ll oversee the 2,270-room resort with 330,000 square feet of meeting space—including an upcoming expansion, The Cove at the Walt Disney World Swan, which will be a 349-room tower opening next year.

NEXT Events, a New York-based company focused on industry networking and matchmaking experiences, hired Krishe Van Der Walt (pictured in main image) as client services manager last month. In her new role, she’ll oversee client service coordination and act as a liaison between vendors and industry stakeholders. The company’s first experience, originally slated for March, has been shifted to December and will offer a one-to-one industry matchmaking experience aboard the Royal Caribbean Cruise Line.

Gregory Pittman has been named new executive chef at Baltimore Convention Center, which has 300,000 sq. ft. of exhibition space and has used Centerplate as its exclusive F&B provider since 2009. Originally from Memphis, Tennessee, Pittman will bring Southern flavor to his menu of world-refined cuisine when the convention center reopens for business. (At press time, the center had been designated as an “alternative care” facility and may be used as a hospital in coming weeks).

Bourne, Massachusetts-based Convention Data Services has named Aimee McBride sales account executive for the Washington, D.C. area. A 13-year industry veteran, she will oversee client relationships and account management for the company, which focuses on helping event organizers attract, engage and understand their audience with registration and lead management tools.

National Grocers Association, the national trade association representing independent retail and wholesale grocers (that’s busier than ever as supermarkets remain among the few businesses open throughout the country right now), has promoted Christopher Jones to senior vice president of government relations and counsel. He will focus on advocacy efforts for NGA.

Lauren Thompson was appointed group marketing director of JCK Las Vegas, Luxury and JCK Tucson shows, both part of the Reed Jewelry Group, last week. In her new role, she’ll oversee the integrated marketing strategy for the shows and work closely with the programming, sales and executive teams to support show development and enhanced communications. (At press time, JCK Las Vegas, Luxury, which was scheduled for June, has been postponed, with new dates TBD.)

People News: Tourism Vancouver’s New CEO, Plus More New Hires and Promotions
Recent job reports from the Bureau of Labor Statistics are dismal, yet the good news is that some companies within the events industry are still making hires and promotions.…
CDC Recommends No Gatherings of 50 People or More For Next Eight Weeks
As of March 15, the CDC is recommending that for the next eight weeks (until at least May 4), all events consisting of 50 people or more be postponed or canceled. According…
People News: VisitPittsburgh’s New CEO, a Flurry of New Hires at MCI USA and IMC
Announcements of new hires and promotions are coming back slowly but surely in the events industry. Here’s a roundup of the latest People moves since mid-April. Jerad Bachar…
More Good News from Philadelphia, Ohio and Las Vegas to Lift Your Spirits
To bring a smile to your face during challenging times, read on to learn about event organizations, venues and companies that are setting a positive example of human…
5 Things to Consider Before Hiring a Speaker for Your Virtual Event
With many events pivoting to virtual right now, event planners are working overtime to make sure their digital event programming is packed with premium educational content.…
And Now, for Some Good News! 5 Event Companies Giving Back Right Now
While it’s important for all of us to stay informed about the current health crisis and its impact on our industry, TSNN believes it’s important to balance out the negative…