HANNOVER MESSE USA Set to Debut in Chicago at IMTS 2018 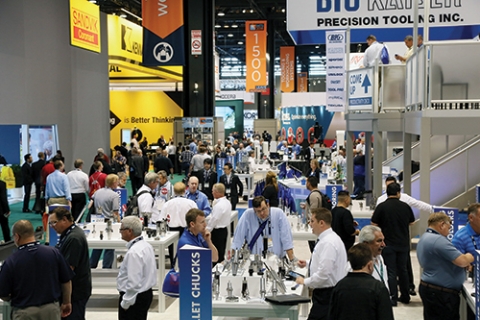 Deutsche Messe is gearing up to stage its first-ever HANNOVER MESSE in the U.S. market next year with HANNOVER MESSE USA, debuting Sept. 10-15 alongside IMTS 2018 at McCormick Place in Chicago.

Similar to the annual HANNOVER MESSE in Hannover, Germany, the event will focus on industrial technology and is expected to attract an estimated 550 exhibitors and more than 100,000 visitors spanning approximately 130,000 square feet of exhibit space.

All of Deutsche Messe’s Chicago-based trade shows, IAMD USA, ComVac USA, Industrial Supply USA and Surface Technology USA, which the show producer has been running in Chicago since 2012, will now be clustered under HANNOVER MESSE USA brand at IMTS.

The four events draw in a wide range of audiences, including design engineers, manufacturing engineers, plant engineers, plant managers and plant operations decision makers who are scouting the latest innovations for use in finished products, as well as in plant automation and repair operations, according to Larry Turner, Hannover Fairs USA president and CEO.

“Attendees will see the full range of manufacturing technology solutions that is a primary synergy and one of the synergies we have seen with our last three co-locations with IMTS since 2012,” Turner said.

Expected to attract more than 5,000 exhibitors and approximately 200,000 visitors when it kicks off April 23-27, the annual HANNOVER MESSE draws in CEOs of global corporations, managers of SMEs and industrial leaders from around the world wishing to stay current with the latest trends and developments in industrial digitalization.

The show’s prominent profile has helped it yield steady growth in its international exhibitor and visitor following. At this year’s event, more than half of HANNOVER MESSE’s exhibitors and approximately 70,000 visitors came from outside of Germany.

The intention is to create a similar impact with HANNOVER MESSE USA in the North American market, according to Deutsche Messe Managing Board Chairman Dr. Jochen Köckler.

“There is no other trade show brand like it anywhere in the world,” Köckler said. “We now want to leverage the power of the HANNOVER MESSE brand to speed up growth in our foreign markets. Therefore, we are premiering HANNOVER MESSE USA co-located with IMTS September 2018 in Chicago.”

Internationalizing its German-grown trade show brands is a strategy Deutsche Messe has been pursuing for many years. As a result, the 70-year-old trade fair organizer now stages about 60 events outside of Germany every year.

The majority of these events are industrial trade shows focused on specific sectors including industrial robotics, factory automation, energy technology and industrial supply.

“As a brand, HANNOVER MESSE has been steadily adding to its acclaim in the U.S. market, in part thanks to the country’s Partner Country showcase in 2016 – a momentous event attended by President Barack Obama,” Köckler said.

He continued, “By launching HANNOVER MESSE on U.S. soil, we hope to attract even more exhibitors and visitors to Chicago while also generating positive spin-off effects for HANNOVER MESSE at its home base in Hannover, Germany.”