When Healthy Conference Foods Go Wrong — and How to Fix It 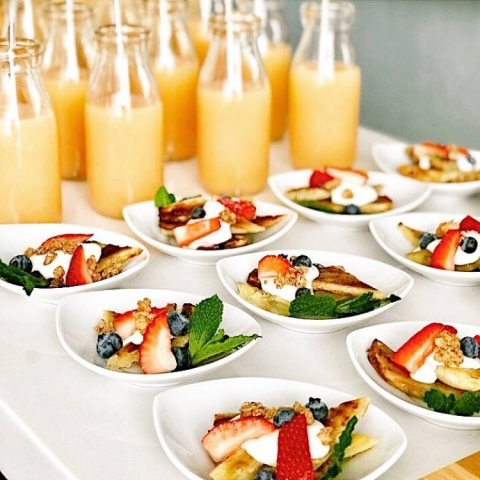 It’s safe to say Murray Hall, executive chef of Bank of Montreal Conference Center, got creative with these healthy treats dubbed “foods of the future” at MPI World Education Congress in Toronto earlier this summer. The spread was part of the inaugural Meeting Room of the Future showcase put on by IACC at WEC, intended to give a glimpse (and a taste) of what’s to come for meetings and events.

While at WEC these were called foods of the future, serving healthier offerings at corporate events has picked up steam in the last few years. Around 64 percent of meeting planners say their meetings are now somewhat healthy, according to the 2019 Wellness in Meetings and Travel Study conducted by Incentive Research Foundation. A still-sizable 24 percent reported their meetings are “mostly” healthy.

The best intentions behind so-called “healthy” foods, however, can sometimes go wrong. For example, juice and smoothie bars have been trending at events, but, when being served to a crowd, the texture and appearance often takes a turn for the worse (separated strawberry sunrise? No thanks).

Perhaps you’ve tried a chia pudding that looked appetizing, but turned out to be gummy and had you wishing for a toothbrush to clean those pesky seeds out of your teeth. Then there’s the classic crudité and dip setup, where the veggies have been out a little too long and are turning brown, curling up at the ends.

Manpreet Kaur, head of corporate communications at Mercer Mettl, had a similar experience at a conference recently. “I was tempted by the crunchy, scrumptious-looking zucchini fries dipped in flaxseed flour,” she says, “[but] they didn’t taste as good as they looked.”

Leveling Up: Taste and Presentation

Getting taste to line up with appearance is key for chefs creating menus for large groups that want healthier options, says Rodolfo Correa, executive chef at Seaview, a Dolce Hotel.

“People eat with their eyes these days,” says Correa. “Presentation is very important, but if it looks good and doesn’t taste good, [they’re] not going to eat it again.”

At this Galloway, N.J. property, which has 34,500 square feet of flexible space and 21 meeting rooms, Correa focuses on fresh produce and lighter ingredients, like seeds and whole grains. Using ingredients in the height of their season is key for maximum flavor, he says.

For example, June through August is peak blueberry season in the region, so during those months he incorporates the juicy berries in in everything from salads to shortcakes.

While blueberries are a near-universally appealing superfood, quinoa — a gluten-free, high-protein seed — can be polarizing. To make it taste better, Correa cooks quinoa in stock instead of water, and complements it with fresh flavors like grilled corn, pickled vegetables, roasted peppers and marinated chickpeas. Not only does this make for a nice presentation, but people love it, he says, and even those with dietary restrictions (gluten-free, vegan) can enjoy it.

When it comes to healthy snacks, Seaview offers healthy items like housemade power bars, made with ingredients like almonds, quinoa and local honey. A break option called “Good Intentions” comes with a variety of snacks, such as pineapple skewers with coconut yogurt dip and celery sticks with peanut butter sauce.

Correa has even found a way to make smoothies last longer. “We use yogurt as a base, and incorporate kale, spinach and flax seed,” he explains. “When you mix it all together, it forms an emulsification that doesn’t separate.” He also incorporates natural honey and bananas to help the smoothies hold up when made in large quantities for groups.

Sadly, vegetarians and vegans have often gotten the short end of the stick when it comes to conference food. And while things are starting to improve, it’s been slow going.

Lee Gimpel, founder of Better Meetings in Washington, D.C., who doesn’t eat meat, started taking photos of especially bad vegetarian options at conferences he attended. One that sticks out to him was a sandwich that was basically just lettuce and tomato on soggy bread, he says.

“I always wondered whether the conference planning team purposefully chose that as a ‘healthy’ vegetarian meal, or whether no one thought about a non-meat option and the kitchen just improvised,” he says. “Either way, it was a total fail."

As more and more people are following plant-based diets (the percentage of Americans identifying as vegans jumped from 1 percent to 6 percent in the last few years), it’s becoming less and less acceptable for conference managers and their catering teams to not think creatively when it comes to vegetable-forward options.

Executive Chef Dan Herman of Walt Disney World Swan and Dolphin is working to change this.

“For healthy options, it’s really about putting as much thought and energy into the dish as you would any other dish,” says Herman. “Guests expect more than a piece of lettuce and some tofu on a plate.”

One healthy vegan item that’s gone over well with groups utilizing the resort’s 333,000 square feet of meeting space and 87 meeting rooms is a vegan rice bowl, which is customizable to individual needs (for example, the rice base can be swapped out for other grains).

Herman and his team prioritize health-conscious, delicious items that cater to all kinds of diets. For example, they offer an entire Paleo-themed snack break, which features gourmet beef jerky, hard-boiled eggs, nuts and seeds, guacamole with vegetable dippers and terra chips. The health-focused approach even extends to beverages, with kombucha on tap and fruit-infused spring water (the latter is a sustainable option to bottled water, too).

When planning out healthy menus for events, it’s important for planners to consider options that will not only taste good, but also supply energy and satisfying protein. The Westin Sarasota (Florida), which has 24,000 square feet of meeting space, takes it to a new level with its Westin Eat Well menu, which is designed to nourish diners’ wellbeing.

“The key to striking a balance between healthy and appetizing is incorporating energy-rich foods that also satisfy hunger,” says Chef Craig MacAvoy of The Westin’s EVOQ restaurant. “Each dish should stimulate the senses without being too heavy, leaving attendees with a clear mind to power the day.”

For breakfast, MacAvoy and his team offer an Avocado Toast Table, which includes toppings like poached eggs, lemon and chives to add to mashed avocado on multi-grain bread. Snack breaks include healthy options like baked pita chips with a variety of hummus, or grape tomatoes and low-fat mozzarella bocconcini with olive oil.

At the end of the day, the food you serve at conferences is important — but it’s not the most important thing.

“I think organizers get caught up in the logistics and focus on impressive food and cool décor, but then forget about the attendees and why they're at the event,” says Gimpel. “More than having great healthy food options, I want conferences to have great content and make awesome connections. If they did that and I had mediocre food, I'd still rave about the event and want to return the next year.”