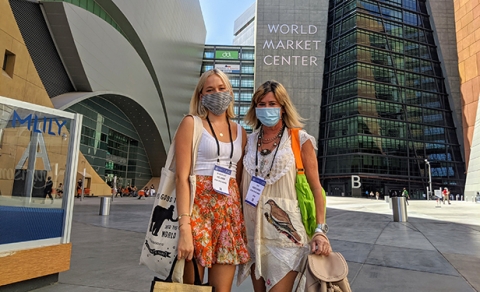 Although it was decidedly smaller and quieter, the 2020 Summer Las Vegas Market delivered positive results with a modified format and extensive safety measures. Held Aug. 30–Sept. 3 at the World Market Center Las Vegas, the biannual gift, home décor and lifestyle event also provided a much-needed opportunity for industry interaction while taking an important step for future events in Las Vegas.

Attendance was at 20 percent compared to 2019 numbers, with 43 states represented and 76 percent of attendees coming from Western states.

Creating a safe and secure environment was a top priority for show management. Buyers had to pre-register for one of the two three-day sessions. Onsite measures included contactless badging, temperature screening, educational signage, showroom and elevator occupancy limits and the required use of personal protective equipment (PPE), which are all part of IMC’s Together Safely reopening strategy.

“One thing we did learn in Atlanta is that you can't remind people enough about the [safety] protocols, and being the first event in Las Vegas, there were a lot of eyes on us from the health department and the governor’s task force,” said Bob Maricich, IMC CEO. He also commented that IMC doubled its efforts in hygiene and mask enforcement since the Atlanta Market, held at AmericasMart in August.

Attendees entered through WMC’s new Expo Center, the $90 million, 315,000-square-foot facility set to officially open in January 2021. More than 90,000 sq. ft. of it was used for a registration area where it was easy to enforce social distancing as attendees got their temperatures taken and received a swag bag containing a mask and hand sanitizer. Inside, the Market was decidedly quieter than its usual bustling iteration, but there still remained a feeling of enthusiasm and hope.

“We came for normalcy,” said Rebecca Johnson, owner of Astoria Vintage Hardware in Astoria, Ore. “We love coming and we felt like it was safe to come. I also have design projects going on and I needed to get motivated, refreshed and inspired.”

Johnson added that she missed the opportunity to see new products and designers in the Pavillions, the trade show portion of the Market that closed this summer, but plans to come back in January when the component returns.

Exhibitor Naomi Celestin came to Market because she didn’t want to miss the opportunity to capture buyer interest. “Anyone who came to the show is here to buy,” said Celestin, who owns Puerto Rico-based Restrung Jewelry. “We’ve had a decent show, better than expected.”

While connecting with buyers in the showroom, Celestin said she was also conducting virtual appointments as well as Facebook live sales events, which she expects will become a permanent part of her sales strategy going forward.

As the Market wrapped up, IMC officials said they were exploring options for bringing back the trade show portion of the event for the 2021 Winter Las Vegas Market, set for Jan. 24-18. Some of the possible features being considered include wider aisles, booths facing in opposite directions, one-way traffic flow and a separate “order management area.”

“The new [Expo Center] lends itself really well to implementing new layouts,” said Dorothy Belshaw, president of Gift at IMC.“These are raw ideas but there are a lot of tools we can use physically and digitally to ensure that the experience is safe but still really exciting.”

Venue Preview: The Expo at World Market Center Coming to Las Vegas Next Summer
A new state-of-the-art exhibition space is taking shape in Downtown Las Vegas. Earlier this year, International Market Centers, owners and operators of World Market Center…
“Ask Joes” Enhance Attendee Experience at AAPEX 2015 in Las Vegas
At last year’s AAPEX, a show for the aftermarket auto parts industry that is held in November at the Sands Expo in Las Vegas, decided to up their attendee engagement game by…
Cox Business Will Enhance Connectivity at Wynn Las Vegas’ Expansion
The forthcoming expansion of the Wynn Las Vegas convention center, set to be complete in February 2020, is getting more high tech. Cox Business announced this week that it…
Trade Show Industry Forges Forward: Safety Protocols Released, Vegas Opening, German Fairs Begin Sept. 1
There is no doubt that COVID-19 has wreaked havoc on the trade show industry globally, but in the past week or two, there have been several big steps forward to start meeting…
OFFPRICE Showfloor Grows Once Again at Summer Show in Las Vegas
The off-price industry is enjoying a heyday in which more national retailers are turning to the channel looking for a boost, and the OFFPRICE Show in Las Vegas remains a…
Las Vegas Market Expands Its Temporary Exhibit Space by 50 Percent
Las Vegas Market has expanded its temporary exhibition space - known as The Pavilions at Las Vegas Market - with the addition of a second location, which is a 50 percent…