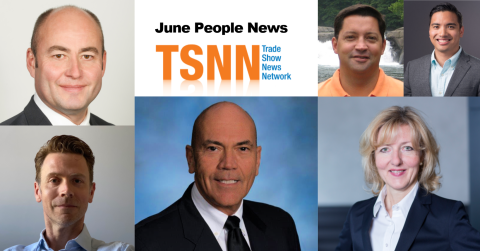 While this summer’s hiring news isn’t as busy as in other years, companies in the events industry are expanding where they can to help gain a cutting edge for events as they begin to return. Here’s the latest news.

On June 22, Meet AC, Atlantic City’s group sales and marketing organization, named industry veteran Larry Sieg as its new president and CEO. He replaces Jim Wood, who departed the agency at the end of 2019. Bringing nearly three decades of tourism, sales and hospitality experience to his new role, Sieg will officially take the reins on July 13.

"Being someone who lives, works and plays in Atlantic City, I understand it has always been a place of great importance regionally,” Sieg said. "I look forward to the challenge we face as we settle into a new normal and have our destination be top-of-mind for meeting planners throughout the country.” After 22 years with the Detroit Metro Convention & Visitors Bureau, President and CEO Larry Alexander will retire from his position, effective Dec. 31. Over the past two decades, he’s played a pivotal role in the economic metamorphosis of the city, and also helped to guide transformation of TCF Center to attract larger meetings and events to Detroit.

“When it comes to attracting conventions and visitors, at one time Larry had one of the most challenging jobs in the country, and in the tough times he was there with creative strategies and steadfast advocacy for our community,” said Marla Drutz, chairman of the CVB’s board of directors. “As Detroit began its rebound, Larry was always one step ahead in presenting metro Detroit as a phenomenal location for events and visitors. His work ethic, command of complex issues and client focus are also exemplary.”

A nationwide search is underway for Alexander's successor.

Petra Cullmann and Bernd Jablonowski have been appointed heads of the operative business division at Messe Düsseldorf in Germany. Cullmann has been with the company for nearly 30 years, most recently serving as global portfolio director for plastics and rubber; while Jablonowski has 25 years under his belt and was previously global portfolio director for packaging and processing.

Reed Exhibitions this week announced Jamie Harrison as new vice president of product development, replacing Richard Remington, who left the company to join sister company Elsevier as managing director of submissions systems and analytics. Harrison has been with Reed for 11 years and will now oversee product development focusing specifically on customer-facing services, including the web platform Atlas.

“[Harrison] has been the driving force behind the development of our global website platform, Atlas, which is adding value and improving customer experiences across more than 500 of our events, with rollout on target for completion by the end of 2020,” said Brian Brittain, chief technology officer.

"We know that events of all types will come back strong post-COVID, but likely with far fewer staff, requiring better tools to deliver a superior attendee, exhibitor, speaker and staff experience,” said Chuck Elias, CEO of 42Chat. “These proven professionals will help event managers and organizations of all types take advantage of our products to deliver a more responsive, personal and meaningful experience both during the event and throughout the year.”

Have People News to share? Send an email to kogletree@tsnn.com for a chance to be featured in next month's edition.

People News: Tourism Vancouver’s New CEO, Plus More New Hires and Promotions
Recent job reports from the Bureau of Labor Statistics are dismal, yet the good news is that some companies within the events industry are still making hires and promotions.…
October People News: New Hires and Promotions at GES, Freeman, Spectra and More
This fall has been a busy one for companies in the meetings and trade show business. Take a look. GES announced two major leadership changes this week. Jay Alitzer, who…
People News: VisitPittsburgh’s New CEO, a Flurry of New Hires at MCI USA and IMC
Announcements of new hires and promotions are coming back slowly but surely in the events industry. Here’s a roundup of the latest People moves since mid-April. Jerad Bachar…
People News: SHOT Show, National Grocers Association and More Make Hires; 8 New CSEPs Awarded
Summer may be the season for out-of-office notifications and slower days, but not so in the trade show industry. Catch up on the latest flurry of hires and promotions the…
People News: New CEOs for Global DMC Partners, San Diego Tourism and More
The latest round of people announcements is all about girl power. Check out the latest promotions, new hires and appointments of (mostly) women across the industry this month…
People News: Core-apps, L.A. Convention Center, Comexposium and More Make Hires, Promotions
In the past, companies typically slowed down with their hiring and other employee changes throughout the summer months, but not anymore. Now, it’s full steam ahead all-year…