The History of Trade Shows 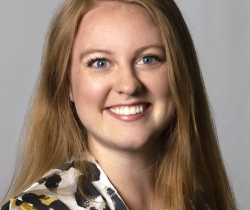 Amanda Walker is an exhibit designer at Skyline Exhibits & Design in Greenville, SC, where she brings a creative edge to expo booths. Based on her experience, she also gets tasked with other creative endeavors including photography, videography and social media marketing.

You could trace just about any form of social connection to much deeper roots and scenes than you would recognize today. Trade shows, and all the forms that it has evolved from, are places of opportunities to network with peers and spread awareness of what you offer to stand out from the competition. These networking events can be traced back in time where humans learned the mutual benefit of trade. While we attend much different shows in the modern world, the remnants of the past can still be recognized today. In the Middle East, bazaars were established as the earliest form of “trade shows.” Vendors sold their goods to travelers and locals. Networks sprung up and ancient caravan trade routes were formed.

During the Antebellum era of America, Elkanah Watson organized the first agricultural fair in Pittsfield, Massachusetts, where prized livestock was displayed with the goal of stimulating competition, as well as the sharing of successful agricultural practices. Activities for men, women and children were included to involve all of the community.

The world’s first recognized trade show, The Great Exhibition, made its debut in England. Queen Victoria hosted the enormous event of over 100,000 exhibits and about 6 million visitors. If you were to attend this show, you would have seen brand new technology in moving machinery, scientific instruments, and even telegraphs, microscopes and surgical equipment.

Alexander Graham Bell introduced a brand-new invention, the telephone, to the public for the first time at Philadelphia’s Centennial Exposition, one of the first World Fairs in U.S. history. New York hosted the first International Industrial Fair, the largest franchise expo where today the annual event hosts over 400 of the top brands in the country. In that same year, Gustav Eiffel designed the Eiffel Tower for the Paris Exposition, an international show that was a huge success and one of the few world’s fairs to make a profit at the time. The fair attracted exhibits from Europe, South America and the United States. This exhibition was so influential in its exposure to culture that it can be directly traced to the turning point in the history of French and modern music today.

The first ever Ferris Wheel was introduced at the World’s Columbian Exposition. Customized metal trays were used to advertise businesses, leading to a surge in the industry. Coca-Cola was one of the many businesses ordering imprinted trays to host with.

The first expo of the PPAI, the Promotional Products Association International, had only 32 exhibitors. But over time, the event has grown to host more than 15,000+ companies. 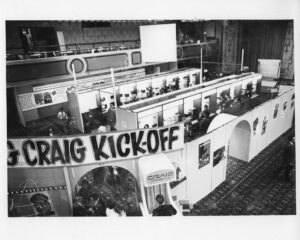 The Consumer Technology Association hosted their very first annual trade show in Las Vegas where new technology in the video game and virtual reality industry are featured. Today, the Consumer Electronics Show (CES) is the largest show in the USA.

There’s a trade show for everything! Even concrete. The World of Concrete hosted their first event with 77 exhibitors displaying their concrete and masonry products. Today, this show is one of the leading trade shows for the commercial construction industry.

The American Academy of Orthopedic Surgeons hosted their first trade show in San Francisco. This show gives medical professionals and exhibitors the opportunity to learn about the latest industry trends and medical advancements.

The Stone Expo and Tile Expo joined forces to create the largest trade show for the floor industry at the International Surface Event, where premiere flooring, stone and tiles are featured. Welcome to the future! Virtual trade shows are in their infancy and are already changing the way we host events. The benefits of no contact, social distancing virtual trade shows have led to an uptick of events that people can attend from the comfort of their home all over the world.

And as the world is turning, so are the faces of trade shows. Social connection and the mutual benefit of networking will always be a fundamental aspect of connecting with others and sharing your company’s message.